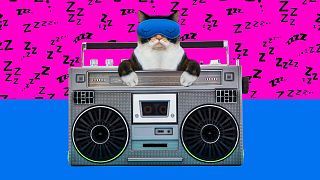 Listening to a relaxing tune before going to bed has long been thought to help us fall asleep. Hundreds of Spotify playlists promise music in exchange for sweet dreams.

But what exactly is relaxing music?

Scientists from the Center for Music In the Brain at Aarhus University in Denmark set out to tackle this question and explore whether so-called sleep music shared a unique set of universal features.

They were surprised to find that pop and R&B music often feature in playlists with names or descriptions relating to sleep.

Looking for the perfect lullaby

The researchers analysed more than 225,000 tracks from 985 playlists on Spotify that were associated with sleep and compared them to music from a dataset representing music in general.

Their research found that, as commonly assumed, relaxing music is often characterised by lower tempo, loudness and energy and is more likely to be instrumental and acoustic, like Brahms’ Lullaby.

However, when counting the number of times a given track appeared in their sleep dataset, the most popular track, appearing 245 times, was “Dynamite” by the popular Korean pop band BTS.

Other popular tracks that often surfaced in Spotify’s sleeping playlists were “Jealous” by Labrinth, or “lovely (with Khalid)” by Billie Eilish and Khalid.

Dr Kira Vibe Jespersen, an assistant professor at Aarhus University who participated in the study, said the variety and frequency of “general pop music” that came up in the database was “the most surprising finding”.

The study was published in the scientific journal Plos One.

Why can pop music help us sleep?

The Danish researchers think it’s possible that “atypical soothing music” such as pop music could increase relaxation because of familiarity and “predictive coding”.

Predictive coding is a general theory of brain function. It suggests that the brain continuously generates models of the world based on our memory of past events to make predictions, and upon a failed prediction, triggers a “small prediction error” to refine future predictions.

“Of course when it comes to sleep, we don't want any prediction errors, we just want it to be very predictable,” Jespersen told Euronews Next.

Familiarity is also said to shape our musical preferences because we like sounds and music that we can associate with previous positive experiences.

“We haven’t actually tested this, but my hypothesis would be that pop music, for example, would primarily be used by people who use music for emotion regulation before going to sleep, as a distraction, or potentially to mask out external environmental sound, such as traffic noise, a neighbour, or other,” she explained.

Are these pop music for sleeping revelations really new?

Previous surveys carried out in Britain and Australia had already revealed there was not an exclusive music genre used for sleeping, but both of them concluded that the most frequent one was classical music.

Interestingly, the Danish study found classical music to be only the seventh most frequent genre.

The researchers in Denmark say the incongruence between the findings could be because both previous studies were carried out in specific countries, whereas their study had an international approach thanks to Spotify’s global database.

They hope their research will help inform future clinical trials in the area of music therapy, as well as bring us a step closer to understanding how music can be used to regulate emotions and arousal.