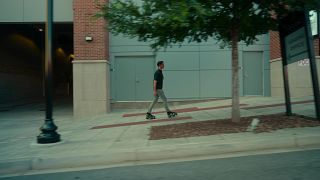 Imagine being able to make a quick grocery run or walk your dog as fast as if you were on a moving walkway.

An American start-up, Shift Robotics, has invented a device designed to be strapped onto your own shoes to boost your walking speed by up to 250 per cent.

That’s right, you could be walking at up to 11 km/h, about three times faster than you normally would.

The “Moonwalkers” look like skates, but they’re not freewheeling - so that you don’t lose your balance.

Thanks to machine learning algorithms, they only move when you do: they can stop when you want, be locked to go up or down stairs, and automatically regulate their speed when you’re going downhill.

Say you’re about to hop on the bus: you only need to lift your right heel and then place it back down on the ground, so that the electronic brake fully locks the wheels.

To return to walking at the pace of a run, you get out of this “lock mode” by lifting your right heel in the air and rotating it clockwise while keeping your toe on the ground.

The company’s founder Xunjie Zhang says the idea for his invention came after a near crash on his scooter while commuting to work.

“I asked myself why I never walked to work - and it’s not just me, a lot of people don’t rely on walking, which is surprising considering it's much safer, easier and more convenient, plus it’s better for the environment,” Zhang said in a statement.

“The problem is that walking is just too slow and inefficient. So I made it my mission to enhance walking instead of replacing it”.

With a team of jet propulsion engineers at Carnegie Mellon’s Robotic Institute and roboticists and sneaker designers, Zhang spent the last five years trying to devise the world’s fastest shoes “relying on the body’s own engineering”.

Shift Robotics says that unlike skating, the Moonwalkers require no skills to learn - it’s genuinely walking.

According to the company, the AI adapts to each user’s gait and it takes under 10 steps for the algorithms to learn the user’s walking patterns.