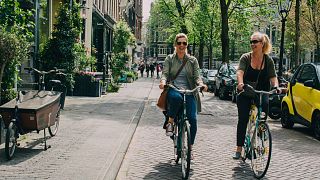 Cycling lovers know how liberating it can feel to zip along a bike path, taking in the charm of a city without the downsides of crammed public transport or traffic jams.

And as governments worldwide try to cut carbon emissions, more and more cities are encouraging people to ditch cars and making it easier for them to hop on bikes instead.

But which are the most bike-friendly cities out there? They’re overwhelmingly in Europe, according to this year’s Global Bicycle Cities Index.

Digital insurance company Luko looked at 90 cities around the world and ranked them based on six main parameters: the percentage of bicycle users, weather conditions, crime and safety (such as accidents and bike theft rates), infrastructure, bike-sharing opportunities and special events such as “no car days”.

The final results are presented on a scale from 0 to 100, where the higher the score, the more bike-friendly the city.

European cities topped the list, mainly thanks to quality cycle paths and weather conditions that include a high number of "cyclable" days.

Here’s a look at the top 10 best cities in the world for cyclists:

The German city in Lower Saxony has splendid parks, so what better way to go check them out than by bike? Hannover made it into the top tier of this year’s ranking thanks to its quality infrastructure and events promoting cycling, including “no car days”.

Bremen is another popular city for bike lovers in Germany, with very flat terrain and cycle paths that criss-cross the city and connect it to other towns nearby. Bremen is also the first German city to be home to an entire “bicycle zone” in the Neustadt district – a neighbourhood with a speed limit of 30 km/h, where bicycles have priority, and where side-by-side cycling is allowed.

According to the index, the Swiss capital has invested a lot in quality cycling infrastructure, scores particularly high on bike sharing, and regularly organises "no car days". The city also has a very low fatality rate among cyclists.

Here’s an unexpected appearance in the top 10: the Chinese city of Hangzhou, the only non-European city in the top tier of the ranking, has 30 per cent of cyclists among its population and scores higher than most rivals when it comes to bike sharing.

The Swedish city of Malmö has an especially low fatality rate among cyclists, thanks to quality infrastructure and regular events promoting bike riding.

Perhaps you expected the Dutch capital to top this ranking, but its safety score may be what’s holding it back: Amsterdam is home to over 1,000 accidents per 100,000 cyclists. That’s nearly five times more than its closest rival, Copenhagen.

Not only is the Danish capital safer for cyclists, but it’s also safer for bikes thanks to a low theft rate and “no car days”. The city is investing a lot in cycling infrastructure, and most residents who cycle continue to do so throughout the long and tough Danish winter.

The Belgian port city doesn’t score strongly on dedicated cycle paths, but a strong bike-sharing system and "car-free Sunday" events have made it indisputably friendly to cyclists.

The German city has a low rate of cycling fatalities, even though more than 39 per cent of residents use bikes on a daily basis. Munster also regularly hosts events promoting cycling.

Topping this year’s ranking is the Dutch city of Utrecht. The city boasts high scores for its cycling infrastructure and weather conditions, and more than half of its population (51 per cent) uses a bicycle in everyday life.

The highest ranking of a UK city in the list is Bristol which ranked number 15 in the list with a score of 43.76, marked highly for low theft and good infrastructure. After that, the next British entry is Edinburgh, ranking 54 out of 90.

While France didn't make it into the top 10, two cities narrowly missed out with Strasbourg ranking 11 and Bordeaux 12.