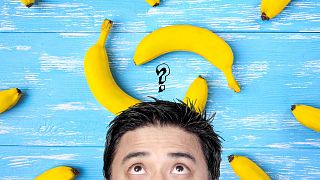 Did you know green bananas were good for your gut? Here are our most popular health stories this year - and none of them were about COVID.   -   Copyright  Canva
By Natalie Huet  •  Updated: 28/12/2022

This year has again generated a lot of headlines about COVID-19, as well as outbreaks in mpox (formerly known as monkeypox), hepatitis, RSV and Strep A.

But there’s a lot more out there in health news. Here are seven of our most popular articles you may have missed this year.

Human sperm does not appear to be in great shape - and experts are warning of a looming fertility crisis.

New research shows that sperm counts worldwide have halved over the past 50 years and the decline is gaining pace. The drop, the authors warned, could become a problem too big to ignore, with the potential to “threaten mankind’s survival”.

While the study did not explore the causes of this collapse, the authors say it reflects "a global crisis related to our modern environment and lifestyle". They point to the disrupting role of chemicals on our hormonal and reproductive systems.

2. Parental age tied to children’s risk of being bipolar

As more couples put off having children until they are older and feel more settled in their lives and careers, and with many now relying on fertility treatments to conceive, delayed parenthood brings its own health concerns.

A new study has found that women who became mothers aged 35 and older face a higher risk of having a child with bipolar disorder. For men over 45, the odds are 29 per cent higher than for men aged 25 to 29.

The reasons for this increased risk are still very much unknown, the researchers say, with both genetic and environmental factors potentially playing a part.

3. Your blood type may affect your risk of stroke

If your blood type is A, we’ve got some bad news: you may be at higher risk - by about 16 per cent - of having a stroke before the age of 60 than people with other blood groups.

Researchers found that those with blood type O, the most common group, are less likely to have an early-onset stroke.

It’s still unclear as to why blood type A confers this higher risk but researchers think it might have something to do with blood clotting factors. Previous research has suggested links between blood type and the risk of developing other conditions such as coronary heart disease.

4. People are cryopreserving their loved ones

At the Alcor Life Extension Foundation in the US state of Arizona, the bodies of almost 200 humans and 100 pets are cryopreserved at subfreezing temperatures inside big liquid nitrogen tanks.

Many were terminally ill with diseases that cannot be cured today, and the hope is that they’ll be revived when technology has progressed enough to treat them.

After the patient has been declared legally dead, the body is soaked in an ice bath, while a mechanical CPR device is used to ensure blood circulation, and medications protect the cells against damage.

5. This country uses the most antidepressants

Iceland was the second happiest country in the world in 2020 according to the World Happiness Report, but it also consumes the most antidepressants in Europe.

Data from the Organisation for Economic Co-operation and Development (OECD) shows that antidepressant consumption intake has soared across the continent over the past two decades. In 14 out of 18 European countries, it more than doubled.

Since 2010, the increase has been the highest in Estonia, Latvia and the UK.

6. Spain is the first country in Europe to introduce menstrual leave

The new law requires women to obtain a doctor's note, with leave being paid by the country's social security system from their first day off work.

Worldwide, menstrual leave is currently offered only in a small number of countries, and it’s highly controversial, with debate centring over whether they help or hinder women at work.

7. Green bananas are good for you

If you like your bananas slightly green, you may be getting some unexpected health benefits.

A 20-year study has found that a starch in unripe bananas can reduce the risk of some cancers by more than 60 per cent.

Patients with Lynch syndrome - an inherited disorder that increases the risk of cancer, particularly in the large intestine and rectum - took a dose of this starch for an average of two years equivalent to what you would get from eating a slightly green banana each day.

The study found the starch slashed the incidence of cancers in the upper part of the gut, which doctors say can be hard to spot and diagnose. The effect of taking the supplement was apparent for 10 years after patients stopped taking it.

And if you prefer your bananas nice and ripe – there’s some more good news: this type of starch is also found in oats, cereals, pasta, rice, peas and beans.

Hopes of a Strep A jab boosted after key antibody discovery