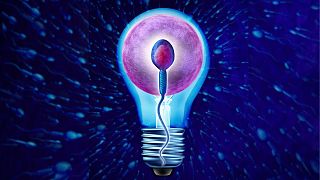 Alarming research shows sperm counts have more than halved worldwide in the past five decades, and that the trend is accelerating. How worried should we be?   -   Copyright  Canva
By Natalie Huet  •  Updated: 04/12/2022

Staring at negative pregnancy tests, enduring the rollercoaster of fertility treatments and the heartbreak of miscarriages: struggling to conceive a child can be extremely stressful.

So, when an international team of scientists published alarming research showing that sperm counts had more than halved worldwide in the past 50 years, and that the trend was accelerating, naturally it sparked concern.

The decline, they warned, could become a problem too big to ignore, with the potential to “threaten mankind’s survival”.

Professors Hagai Levine and Shanna Swan, who have been studying reproductive health for decades and published these latest findings, drew parallels with the climate crisis.

They told Euronews Next how first, there was denial. Eventually, we recognised there was a problem. And only then did we accept to take responsibility and try to turn things around.

So, how worried should we be about sperm counts? What do sperm counts actually mean for male fertility? What is driving this decline? And importantly, what can we do about it?

Fertility is complex and multi-faceted, and none of these questions has clear-cut answers. But let’s walk you through what we know about the collective state of men’s reproductive health.

Why do sperm counts matter?

Sperm count is important, but it isn’t everything. When a man goes for a fertility checkup and gets a semen analysis done, three key parameters are looked at: sperm count, but also sperm motility and sperm morphology.

Sperm counts are simply easier to consistently track. Semen analysis techniques have evolved over the years, but counting sperm has mostly relied on a fairly simple device called a haemocytometer. In their meta-analysis of research on sperm counts since 1973, Levine and Swan’s team only selected studies - 223 of them - that used this method.

They noted that while sperm counts are “an imperfect proxy for fertility,” they’re closely linked to fertility chances.

An abnormally low sperm count, also called oligospermia, is when a man has fewer than 15 million sperm per millilitre of semen.

But Levine and Swan’s team note that research suggests below a threshold of 40-50 million/ml - the global average currently sits at around 49 million/ml - the probability of conception rapidly declines, meaning couples are likely to have to wait longer to have a baby.

The ability to produce testosterone and sperm is highly dependent on your overall health, and it's one of the things that's most vulnerable in a man

“In my opinion, there is absolutely no question that human male reproductive health has changed for the worse over the past 70+ years, and is a real concern going forwards in terms of its negative impact on couple fertility potential,” Professor Richard Sharpe, of the University of Edinburgh's Centre for Reproductive Health, told Euronews Next.

Men with low sperm counts tend to live shorter lives and are more likely to have cancer, diabetes and cardiovascular disease than more fertile men.

“The ability to produce testosterone and sperm is highly dependent on your overall health, and it's one of the things that's most vulnerable in a man,” said Professor Bradley Anawalt, a male reproductive endocrinologist at the University of Washington School of Medicine.

Are chemicals to blame for falling sperm counts?

While their study did not explore the causes of the sperm count drop, Levine and Swan point to the role of lifestyles and the manmade chemicals that are ubiquitous in our modern world.

After all, much of the food we eat and the everyday products we use are packaged in plastics - from our cosmetics and cleaning products to our microwaveable popcorn and takeaway meals. The chemicals from these plastics leach into our food, our environment, and our bodies.

Research shows chemicals such as phthalates, which have long been used to make plastics soft and flexible, and bisphenol A (BPA), which is used in hard plastic bottles, can disrupt humans’ hormonal and reproductive systems, especially in their earliest stages of development, inside the expectant mother’s womb.

Swan delved into the topic in a book, Count Down, and has been sounding the alarm across mainstream media - as well as on Joe Rogan’s podcast.

Her book outlines how chemical pollution is harming fertility and leading to more babies (and animals) being born with reproductive disorders and smaller penises.

Research suggests chemicals such as phthalates can affect one of the most significant differentiators of a person’s sex: the measurement between the anus and the scrotum, known as anogenital distance (AGD) - or, more commonly, as gooch or taint.

A male’s AGD is typically twice the length of a female’s AGD, but it can be shorter if testosterone production is impaired during the first trimester of pregnancy, when the release of this hormone is key for a genetically male embryo to develop testicles and a penis.

“If the testosterone is not there at the right time and there isn't enough of it, then that process of differentiation doesn't happen or isn't complete,” Swan explained.

In a study carried out on students in New York a decade ago, Swan found that men with an AGD below the 5 cm median were seven times more likely to have a low sperm count putting them in the “subfertile” category.

It also makes them more likely to have undescended testicles and a smaller penis.

Other chemicals are also suspected to interfere with the early development of testicles. A recent study on 864 Danish young men found that those who were exposed in utero to higher levels of “forever chemicals” known as PFAS consistently had lower sperm counts and a higher proportion of immotile sperm in adulthood.

However, some experts say more research is needed to pinpoint what is actually disrupting testosterone production in the critical time window of genital development in early pregnancy.

Sharpe said he started suspecting environmental chemicals 30 years ago, but he’s now increasingly suspecting that exposure to more active pharmaceutical drugs such as paracetamol may be to blame.

In my opinion, there is absolutely no question that human male reproductive health has changed for the worse over the past 70+ years

“Nearly all pregnant women take one or more such drugs during pregnancy, with paracetamol (acetaminophen) top of that list,” he said.

“The evidence we have, from several groups, is that exposure of the human foetal testis to human therapeutic levels of paracetamol is sufficient to impair testosterone production”.

Anawalt, who’s been sceptical of the “spermageddon” thesis, still says it’s fair game to zero in on the role played by chemicals and medications.

“I think it's important for all of us to ask the question: what does it mean to have all of our prescription drugs flushed down the toilet and to join the water supply of the world?”

What about our lifestyles?

It’s difficult to overlook the fact that the past 50 years - the period over which sperm counts have halved - have seen major changes in how we live that haven’t been good for fertility.

Scientists suspect expanding waistlines, sedentary lifestyles, stress, and alcohol and drug use are likely all playing a role.

“During that time, we've had what has been described probably appropriately as an epidemic of weight gain and obesity,” Anawalt stressed.

“And we do know that with increasing body weight and obesity, there are declines in serum testosterone and there appear to be declines in fertility and sperm concentration”.

Obesity is also linked to type 2 diabetes, which increases the risk of erectile dysfunction.

In a recent Danish study, obese men who followed an eight-week low-calorie diet and lost on average 16.5 kg saw a 40 per cent improvement in their sperm count.

This boost was sustained for a whole year in men who maintained the weight loss, but not in those who regained weight.

So, the good news is some of the damage is reversible, provided we take action.

What can we do to protect our fertility?

“It may sound boring and hackneyed, but eating a balanced diet with lots of fresh veg and fruit, and low amounts of processed food, is by far the best thing that people can do,” Sharpe said.

The added benefit of doing that is that it will also lower your exposure to manmade chemicals such as phthalates or BPA, which tend to get into processed and pre-packaged foods, he noted.

Try to exercise, maintain a healthy weight and don’t smoke. Smoking is strongly associated with infertility.

“Whatever your doctor tells you to do to help you care for your heart is going to help your fertility,” Swan advised.

While recognising not everybody has the resources to do that, she recommends eating organic food and using glass - not plastic - containers to store, freeze and heat meals.

Among other tips to avoid exposure to chemicals: minimise the number of personal care products you use; avoid fragrances - whether in laundry, soap or plug-ins and air fresheners - as they often contain phthalates; take off your shoes when you get into your house to leave the dust at the entrance; vacuum with a high-efficiency particulate air (HEPA) filter; and filter your drinking water if you suspect it might contain chemicals or microplastics.

Steer clear of the hot tub, sauna or steam room before trying to conceive, as the heat will lower your sperm count. Similarly, you might already know it’s best to also avoid tight underwear, as testicles hang outside of the body for good reason: they need to be kept cool.

And importantly: have sex! Anawalt advises a reasonable target is once or twice a week, especially around the time of ovulation.

While modern couples may have busy schedules and expect that things will happen when they plan for it, it’s important to find the time to stay healthy, consult a doctor if in doubt, and overall be patient.

“Sometimes you just need to give it a little time,” Anawalt said.