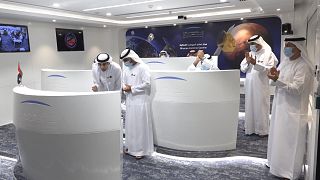 It has been nearly two years since the Emirates Mars Mission reached the red planet in February 2021, producing fascinating results. The United Arab Emirates became the first Arab country to reach Mars and the fifth country globally to study Martian weather.

After six years of planning at the Mohammed Bin Rashid Space Centre, the Emirates Mars Mission has since fuelled innovation in other sectors.

Ibrahim Al Qasim, the Deputy Director General of the UAE Space Agency told Euronews, “The choice was Mars because Mars was of great interest for the global science community. We wanted to send a mission that complemented previous missions and looked deeper into the relationship between the upper and mid atmosphere layer of Mars.”

The uncrewed mission to Mars entered the orbit of the red planet seven months after the Hope Probe launched from Japan on 20 July 2020. The probe is currently in orbit for one Martian year, the equivalent of 687 days on earth. This is also the first time the international science community has a full view of the Martian atmosphere at different times of the day, throughout different seasons."

Omran Sharaf, the Assistant Minister of Foreign Affairs and International Cooperation and Chairman of the UN Committee on the Peaceful Uses of Outer Space told Euronews about the new verticals that have since come about within the Ministry of Foreign Affairs.

All data from the mission is being made available to a host universities and research institutes around the world. As well as being a huge inspiration to young Arabs, the mission is also set to make a lasting impact on the UAE economy.

Ibrahim Al Qasim, the Deputy Director General of the UAE Space Agency added, “The Mars mission has been a very powerful, inspiring mission for the youth in the UAE and in the region. And that was originally the main driver for funding this mission.”

Some of the most significant outcomes to date include new insights into the discrete aurora phenomenon on the planet’s nightside atmosphere, the location and evolution of dust storms with unexpected turbulent behaviour, and a never seen before phenomenon of a huge worm-like aurora extending halfway around the red planet.

A marker for life on mars

Thomas Reiter, the former Interagency Coordinator and Advisor to the Director General of the European Agency told Euronews, “The UAE has done really a remarkable job here and it also shows that... collaboration [in] the scientific field is extremely important.”

He revealed that the European mission, The Trace Gas Orbiter, which has been in Mars orbit since 2016 is looking for various trace gases in the atmosphere, specifically methane, which could be a marker for life.

“So far, we don't have really any clear evidence", Thomas Reiter explained. "But once again, it's a question of coordinating these efforts and defining the proper objectives for missions like the Mission of Hope and future missions.”

Along with a number of probes in orbit around Mars in Europe, there is also a key focus on sustainability and the need for regulation.

“We live in an age where the orbital environment of Earth is really changing a lot, mainly due to the proliferation of space debris and mega-constellations", explained Rolf Densing, the Director of Operations at the European Space Agency told Euronews.

"Today [there are] about 8000 objects in orbit around Earth. And then we have business people that are planning to launch mega-constellations that have tens of thousands of satellites.”

There have been 14 scientific papers published from the mission with unique findings, and its latest images have revolutionary implications for science.

To help build the first full picture of the climate and atmosphere on Mars, the ultimate goal of the Emirates Mars Mission is to build a creative and competitive knowledge-based economy.