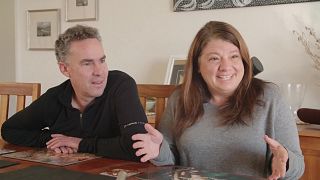 Amid the ongoing energy crisis and climate change, people around the world are searching for alternatives to power their homes.

Among them are Syd and Camille Goodman.

The Australian couple has turned their hand to collecting and recycling salvaged batteries to power their home and leave as small carbon footprints as possible.

In their garage, hundreds of batteries are lying around. Syd disassembles and tests each one of them before using them to store solar power, which is their house’s main energy source.

The couple says that Australia’s Black Summer in 2020, where there were intense bushfires in many parts of the country, was a wake-up call to change their lifestyle to be more sustainable.

"We started trying to figure out how much carbon could we emit, so we could have a budget. And the more we looked into it the more we realised there is no proper amount because we're going to overshoot. So we couldn't say four tonnes or five tonnes and most Australians I think emit about 14 tonnes anyway, so we just thought, we have to shoot for zero, as close to zero as possible," said Camille.

When they calculated their emissions, they found their biggest contributor wasn't flights, lights, food, or even power, but “massively the vehicle”.

According to Finder AU, 92.5 per cent of households in Australia have a car.

For people like the Goodmans who live out of town, cars are essential.

"I bought a 2019 Model 3 Performance Tesla off eBay actually. All the internals of this are going to go into the Land Rover. The screens, the air conditioning, the sound effects," said Syd.

The Goodmans keep a very close eye on their carbon emissions through screens and reports. They say their emissions have dropped dramatically.

"It's almost like a tax return is how we treat it. Let's work it out because it's a cost on the environment. It's expensive to emit. Most of the stuff you do that costs a lot of money, like petrol and fuel, is expensive," said Syd.