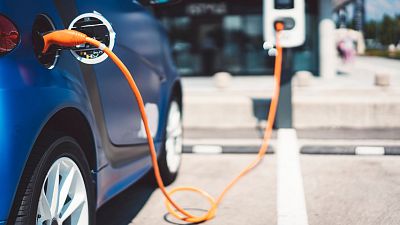 Those who want to go electric will see the €6,000 bonus increased to €7,000, he told the newspaper Les Echos, ahead of the opening of the Paris Motor Show on October 17.

France also has scrapping incentives, which can bring in up to €5,000 for a petrol or diesel car, depending on the person’s income.

Macron also announced a tariff shield on energy prices will be extended to recharges on electric terminals, ensuring electric car drivers aren’t hit too badly by the rising cost of electricity.

Macron’s administration isn’t the only European government to offer incentives for drivers to switch to electric.

What do other countries across Europe offer?

Along with France, Romania currently has one of the most generous purchase subsidy schemes in the European Union.

Fully electric cars are subsidised by €10,000, while plug-in hybrids are subject to a €4,500 subsidy. There are also scrapping bonuses available, which comes in around €1,500 per car.

Germany’s generous scheme has seen a successful boom in EV ownership, with one million electric cars officially on its roads in July 2021.

The country is aiming for 15 million EVs by 2030 - but it has announced plans to reduce its subsidy.

Estonia stands out amongst EU countries as the only member state not to offer either subsidies for purchases of electric vehicles, or any other significant incentive.

It ended a financial incentive programme in 2014, which had seen the government subsidise up to half of a vehicle’s cost, up to €17,000.

Six countries in the EU do not provide any purchase incentives for private owners. These are Bulgaria, Czech Republic, Denmark, Estonia, Malta and Slovakia.

The UK, which like Germany has seen its incentive scheme lead to a huge boom in EVs, has actually now stopped its grant for regular electric car purchases.

Instead it has focused a £300 million (€344 million) grant on funding for sales of electric vans, taxis and motorcycles.