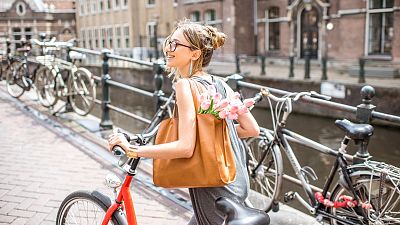 The Netherlands' transformation into a bike-friendly country has been decades in the making   -   Copyright  Canva
By Callum Tennent  •  Updated: 17/09/2022

The Netherlands has become the world’s leading example of a cycling nation, and for good reason. The country has more bikes than citizens, and even the country’s prime minister often cycles to work.

In 2018, more than a quarter of all trips were made by bike; a sharp contrast to the UK, France, and Ireland, where that figure drops to less than 5 per cent of trips.

For journeys under 7.5 km, that figure rises to more than a third.

So, how did the Netherlands become home to 23 million bikes and roads which have been redesigned to accommodate them?

The birth of a cycling nation

By the 1970s, the cities of the Netherlands were, like most cities in Europe, clogged with cars.

Dutch streets, many constructed during medieval times, were not designed for this kind of traffic, and the results were deadly.

The public backlash against such high fatality rates also coincided with the oil crisis of 1973, when some members of the Organization of the Petroleum Exporting Countries, or OPEC, cut oil production and embargoed exports to certain countries.

When combined together, these two events were enough to persuade the Dutch government to put its car-centric urban planning days behind it.

Perhaps the most important action the Dutch government has taken to encourage people into the saddle is the creation of many miles of bike lanes.

But the Netherlands didn’t stop there, the country also has a series of roads used by cars and bikes where bikes have priority.

Dutch roundabouts are another example of where urban planning has become more bike and pedestrian focussed.

Around 60 per cent of roundabouts in Dutch cities have a physically separated circular cycle track that runs around the roundabout intersecting its exits.

In most urban areas, bikes are given the right of way, with cars expected to stop. Many junctions have also been redesigned to help reduce the risk posed to cyclists.

Depending on the speed limit on a road before a junction, bike lanes are either meant to come closer to traffic to improve visibility or curve away, allowing cars to turn before they cross a bike lane.

Where bike lanes have the right of way, such as when vehicles turn off a main road into a side street, these lanes should be raised according to guidelines.

As well as having designed cities and roads which help cyclists from point A to B safely, authorities have also invested in bike parking.

In 2019, the Dutch city of Utrecht became home to the world’s biggest multistorey bike park, with enough room for 12,500 bikes.

The country has also worked to allow a smooth transition between different forms of transport, with most train stations now having bike parks.

On top of this, some trains even have a special bike carriage or bike spaces within carriages.

Benefits of being a cycling nation

Once you dive into the benefits of cycling, it’s easy to see why countries around the world are rushing to replicate Dutch success.

A 2016 study in the UK on the value of cycling found that it was not only beneficial to cyclists but also improved productivity, had a positive societal impact, and lowered health-related costs for the state.

A recent report by Decisio estimated the social export value of Dutch cycling is between €1.2 to €3.8 billion per year.

Bike manufacturing, sales, maintenance and rental together account for 13,000 full-time jobs in the country.

The Netherlands shows no interest in hitting the breaks on its cycling ambition any time soon.

At the end of last month, the Dutch Secretary of State for Infrastructure and Water Management wrote to parliament setting out her goal of getting an extra 100,000 people commuting by bicycle over the next two and a half years.

The department is also currently reviewing plans on how it might get bikes to the more than 200,000 children and young people who cannot afford one.

Hope for other countries

While the Netherlands might be the front runner, other countries and cities have shown that bikes can be quickly adopted.

Copying Dutch techniques, the city turned many car park spaces and converted them into raised and separated bike lanes.

Seville now has a whole network of cycle lanes, the first 80 km of which cost less than €20 million to construct.

The rapid expansion of temporary cycle lanes around the world during the pandemic shows that the Netherlands might not be as special as we think it is.

With enough political will, anywhere could become the next Netherlands.