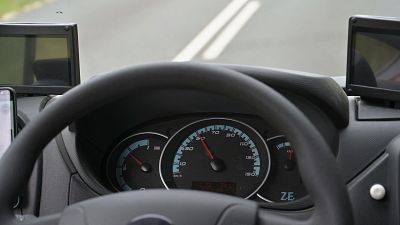 A picture taken on July 29, 2022 shows an inside view of the experimental driverless autonomous shuttle near Mezieres-en-Brenne, Central France   -   Copyright  GUILLAUME SOUVANT/AFP
By Pascale Davies  •  Updated: 01/09/2022

You can now drive hands-free in France but only if you meet the many conditions as the long road towards autonomous driving unwinds.

On Thursday, France authorised “level 3” autonomous driving. What this means is that the driver can hand over control to the vehicle but must be ready to drive when needed.

Level 3 autonomous driving has been authorised in Europe since July this year but the bloc and France have added certain rules.

This is everything you need to know about what you can and can’t do in France.

What does each level mean?

There are five levels of autonomous driving and most cars on the road are designed with some elements.

Level 0: The driver is fully responsible for all the driving tasks

Level 1: The driver can delegate either steering or accelerating.

Level 2: Most new cars offer this, means the vehicle can perform several driving tasks such as staying in the line.

Level 3: You can take your hands off the wheel during slow-moving traffic but you still need to be able to take over in case of accident.

Level 4: Unlike level 3, the car can pull over safely even if the driver does not respond to the vehicle’s request.

Level 5: The desired future, whereby the vehicle can operate fully and safely without a driver in all conditions.

What will change in France?

The big difference with level 3 is that the driver is no longer responsible for driving. Instead, it is the car manufacturer who is liable in the event of an accident.

Another important aspect of the move in France is that the road the cars drive on must have a central separator from other roads and must be closed to pedestrians and cyclists.

Additionally, the maximum speed will be 60km/h but that will increase to 130km/h as France adopts the United Nations regulations. It will allow level 3 autonomous driving to reach the top speed on the condition they can independently perform automatic overtaking.

But France and Europe are still far away from allowing fully unmanned vehicles on roads. Only one semi-autonomous vehicle has been approved for use the: Mercedes S-Class.

While Tesla is trying to roll out a fully autonomous vehicle, it does not yet have level 3 certification.

Meanwhile, Germany is on an even faster lane to having fully autonomous cars, after the country became the first to lay the foundation for level 4 autonomous vehicles.

The EU’s proposed regulation will allow 1,500 fully driverless vehicles per carmaker model to be registered and sold each year.

“Europe is making sure that this technology improves our citizens’ daily life, and that the automotive industry has a predictable and safe framework to continue rolling out innovative technology solutions and maintain its global competitiveness,” EU internal market commissioner Thierry Breton said in July.