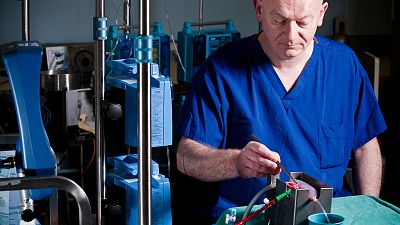 Scientists from the University of Cambridge have successfully managed to alter the blood type of donor kidneys in a move that could have major implications for kidney patients, especially those from ethnic minorities.

The breakthrough could increase the supply of kidneys available for transplant, particularly within ethnic minority groups who are less likely to be a match for the majority of donated kidneys, the charity Kidney Research UK which funded the research said.

But changing the blood type to the universal O could allow more transplants to take place, as it can be used for people with any blood group.

People from minority communities are more likely to have B type blood and with current low donation rates from these populations, there are simply not enough kidneys to go around.

The Cambridge scientists managed to alter the blood type on three deceased donor kidneys, converting them to the universal O blood type.

They used a normothermic perfusion machine – used to pass oxygenated blood through a kidney to better preserve it for future use – to flush blood infused with an enzyme through the deceased kidney.

This enzyme removed the blood type markers that line the blood vessels of the kidney, resulting in the organ being converted to the O blood type in "just a matter of hours," according to Serena MacMillan, a PhD student at the University of Cambridge who worked on the project.

"It’s very exciting to think about how this could potentially impact so many lives," she said in a statement.

According to the organisation, those from ethnic minority groups often wait a year longer for a transplant than caucasian patients.

"People from minority communities are more likely to have B type blood and with current low donation rates from these populations, there are simply not enough kidneys to go around," it said.

The Cambridge team now needs to see how the newly changed kidneys react to a patient’s usual blood type in their normal blood supply.

This can be done through the perfusion machine before being tested on actual people, by taking the transformed kidneys and using the machine to introduce different blood types, and then monitoring how the kidney reacts.

"After successfully shifting blood group to the universal O type, we need [to] now look to whether our methods can be successful in a clinical setting and ultimately carried through to transplantation," said Mike Nicholson, Professor of Transplant Surgery at the University of Cambridge, whose previous research into normothermic perfusion was a key basis for the current project.

Calling the latest breakthrough "potentially game-changing," Aisling McMahon, Executive Director of Research at Kidney Research UK, said that their work offers "a glimmer of hope to over 1,000 people from minority ethnic groups who are waiting for a kidney".

MacMillan and Nicholson’s research is set to be published in the British Journal of Surgery in the coming months.