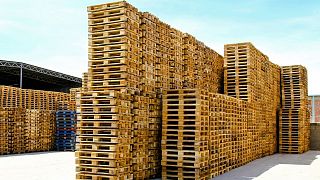 Ukraine, Russia and Belarus were key to Europe’s supply of wooden pallets. The war and sanctions upended the market.   -   Copyright  Canva
By Giulia Carbonaro  •  Updated: 17/04/2022

The European Pallet Association (EPAL) and the European Federation of Wooden Pallet & Packaging Manufacturers (FEFPEB) have both warned that wooden pallets - indispensable handling and storage products used to transport goods and dispatch them across warehouses or supermarkets - may soon become harder to find in Europe due to the war in Ukraine.

That’s because Europe, in normal times, massively imports its wooden pallets and the materials to make them from three countries: Ukraine, Russia and Belarus. The war in Ukraine, combined with retaliatory Western sanctions against Russia and its ally Belarus, effectively eliminated that entire source of supply.

The result, for companies further down the line, is a sudden rise in pallet prices and the risk of running out of a product that’s often overlooked yet essential to supply chains, as it allows businesses to stack goods and transport them efficiently with reduced loading time.

“There’s a phrase: ‘Pallets move the world,’ and it's true,” Marshall White, a Professor Emeritus at Virginia Tech and a leading expert in wooden pallets, told Euronews Next.

“Without pallets, our supply chains would be grinding to a halt, shipping one box at a time, which is the way we did it before World War One, when the pallet started to be introduced in the supply chains,” he said.

“Pallets move the world, they're the critical interface between everything that moves product, all equipment, shipping, trucks, forklifts and the product itself. It makes the supply chain work”.

When Russia invaded Ukraine on February 24, the country’s sawmills and pallet factories stopped operating, as factory workers either fled the war or were drafted into the military. The wood, destined for packaging and pallets, was not exported to Europe either.

According to Michael Modugno, co-founder and vice president of PGS, a company that sells and rents wooden pallets across the continent, around a quarter of the timber used by Europe’s pallet industry normally comes from Ukraine, Belarus and Russia - and its absence is clearly being felt across the supply chain.

“Today, we have more than 25 per cent of the timber missing in the factories,” Modugno told Euronews Next.

The countries set to suffer the most from the supply squeeze are those that rely the most on these imports, he said, citing Germany, Italy and the Netherlands.

Last year, according to the FEFPEB, Europe imported more than 2.7 million cubic metres of sawn softwood timber, much of which was used to make wooden pallets and packaging manufactured in European markets. Ukraine also produced and exported an estimated 15 million pallets, most of which were sent to Europe.

“Some 20 million pallets used to be exported from Russia, Belarus and Ukraine to Europe. So now on top of the timber missing (from the market), we also have pallets missing,” said Modugno.

“We are also running out of nails, because most of the producers of nails in Poland and eastern Europe used to buy the steel from Russia,” he added.

The German pallet industry federation HPE said this week its manufacturers were facing an “acute” shortage of nails. They're no detail in the industry: 70 to 80 nails are needed to make a single pallet.

Historically, the pallets market has been fairly stable. But the supply chain snags caused first by the COVID-19 pandemic and now by the war in Ukraine have led to unprecedented price increases. The industry’s HPE price index of sawn timber and wood-based products for pallets has skyrocketed over the past two years.

As the European economy bounces back from months of pandemic-induced lockdowns, demand for pallets is very strong, Modugno said, but shortages of truck drivers, tight timber supplies and soaring energy costs are making it difficult to meet this demand.

Modugno said it’s impossible to predict all the indirect effects of the war on the wooden pallet market, but if there was a shortage in Europe, the sector would have to prioritise strategic sectors such as the pharmaceutical and food industries. Other less critical sectors could potentially suffer a setback.

He added however it will likely not reach that point if businesses come up with solutions like recovering and reusing pallets.

Pallet shortages on the frontlines in Ukraine?

Modern pallets, designed for forklift trucks, have played a key role in logistics for the past century. Their use really took off with World War II, when the US army used them to efficiently transport weapons and munitions as quickly as possible.

Fast-forward to 2022, and pallets may also be playing a discreet but key role at the heart of the war in Ukraine.

Some experts have claimed that Russia’s invasion might have been hampered by a shortage of pallets that forced Russian troops to carry boxes of mortar and ammunition by hand, as images from Ukraine have shown.

Twitter user Trent Telenko, who in his bio says he’s a retired US Department of Defense civil servant, posted a detailed thread in March pointing out a lack of pallets in photos of Russian troops on the frontlines.

Prof. White, who has worked in support of the Department of Army and the Department of Navy in the US to help them improve the efficiency of their supply chain, said Russia is likely missing out on a lot of imported wooden pallets.

“Looking at the numbers, I would guess that Russia imports a lot of pallets, and in this case, with sanctions in place in both directions, that could have a significant impact on pallet availability to the Russian military,” he said.

Running out of pallets is not a desirable situation for either a modern economy or a modern army.

“If you want to have an efficient supply chain, commerce or military, you keep your products on pallets as far down the supply chain as you can, because as soon as you have to remove them from the pallet, your efficiency drops,” White said.

“And all of this seems to be playing into the problems that we seem to be seeing with the Russians, moving material, clothes, food and ammunition to the battlefield”.