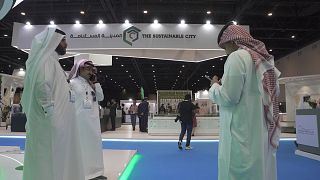 The Dubai Annual Investment Meeting (AIM) is an initiative of the UAE Ministry of Economy to provide a framework for global exchange on international investment policies and growth. The platform aspires to ignite positive transformation by creating investment opportunities.

The eleventh edition of AIM was opened by Abdullah bin Touq Al Marri, Minister of Economy, UAE who set out the agenda.

“The AIM framework (was) specifically created to promote global exchange on the key principles underpinning investments, movements and trends to drive smart and inclusive global growth,” he said.

The theme this year was on investments in sustainable innovation for a thriving future. Organisers said this translates into foreign direct investment, portfolio investment, SMEs and start-ups, and the future of cities.

...sustainability is no longer a cost to business. It is actually a fantastic business opportunity.

Ana Draskovic is the Director of the European Bank for Reconstruction and Development. She was speaking on a panel on sustainability.

“One of the messages that is also quite interesting is that sustainability is no longer a cost to business. It is actually a fantastic business opportunity. So completely new asset class, and something that everybody should be looking into,” she said.

As well as focussing on attracting new investments, AIM set an agenda for the year ahead to look towards developing youth entrepreneurship and more future cities.

During AIM, organisers revealed that at the event businesses expressed their bullishness on the further acquisition and adoption of newer technologies to help power operations moving forward.

Elsewhere, the UAE is home to thousands of Irish expatriates, and trade between the two countries is increasing. Exports from Ireland to the UAE grew 12 percent in 2020, but now, as Ireland has reopened, they hope to see a return of tourists from the region.

There are some really big Irish characters that came over here in the 1970s.

CEO of Tourism Ireland, Niall Gibbons said the relationship between the two nations is very special.

“It does stretch back decades. There are some really big Irish characters that came over here in the 1970s. Colm McLoughlin - Dubai Duty Free. Gerald Lawless - Jumeirah Group. And to this day, they are still coming back and forward and there's a large Irish community here now,” he said.

Over a decade ago the decision was taken to establish a Tourism Ireland presence in the UAE to nurture that connection.

“It's been fantastic because the connectivity now is come in with Emirates, with Etihad and we're seeing a large number of people from this region visit Ireland and from a tourism perspective it's all good,” Niall Gibbons added.

For Tourism Ireland the region was key for market diversification and the industry was heavily reliant on British and North American tourists.

“It's an important part of the world from the UAE perspective, but also from our perspective. With Emirates connected with over 200 destinations around the world and Etihad well connected too, it gives us a great gateway from here, but also into other markets like India, China, Australia, New Zealand and obviously COVID has come along and has a big impact on the industry. But now it's about getting back to tourism,” CEO of Tourism Ireland, Niall Gibbons said.

Elsewhere, as the Annual Investment Meeting addresses sustainability and innovation challenges at government level, some individuals are seeking solutions themselves.

I was told you couldn't do that. And so, like a child, I wanted to do it.

In Australia, most people rely on local governments and private companies to access water and electricity, but some are turning to off-grid options in the hope of becoming self-sufficient.

About twenty-five years ago Michael Mobbs, went off-grid. The sustainable projects specialist said it was for two reasons: “I was told you couldn't do that. And so, like a child, I wanted to do it. And secondly, I have this gut instinct that we need to show as much love as we can to Earth.”

His home has buried tanks that collect unfiltered rainwater for reuse. The collected rain goes through filters and pipes and into tanks. Then, when it's needed by the home, it is sterilised by an ultraviolet lamp to kill viruses and pathogens.

“Climate change affects the water supplies, and therefore we will be at a point where we need clean and a sustained flow of water for an increased population on this planet,” he said.

In 1996 Michael Mobbs installed 18 solar panels on his roof, later adding 12 panels, bringing the total power capacity to three point five kilowatts. In 2015 he took a step further and disconnected his house from the electricity grid. Going off-grid makes sense environmentally, but it may not work from a financial point of view.

Gregor Verbic, Associate Professor, Centre for Future Energy Networks, University of Sydney: “If you compare the two solutions. So everybody being self-sufficient versus everybody having maybe rooftop solar on the roof, maybe a battery in the garage while still being connected to the main grid for the sake of reliability. Which option is cheaper? And it's quite obvious that still using the main grid in Sydney and other big cities, other populated areas is still cheaper," he said.

For Gregor Verbic the future of electricity does lie in renewables. But it will mean changing the way we consume and pay for it.