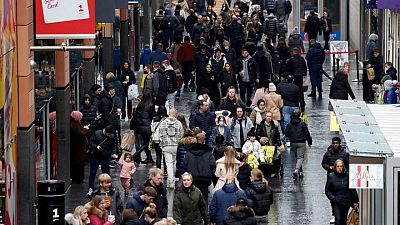 LONDON – British retailers reported slower sales growth in February but said demand was better than normal for the time of year as the Omicron wave of coronavirus cases eased, according to a Confederation of British Industry survey published on Thursday.

The CBI’s monthly retail sales balance halved to +14 in February from +28 in January, a bigger fall than economists’ forecasts in a Reuters poll for a small decline to +25.

However sales for the time of year improved sharply in February from January, with the balance rising to +16 from -23.

“The easing of COVID-19 restrictions – including the end of work-from-home guidance – has, unsurprisingly, encouraged shoppers to return to the high streets,” CBI economist Martin Sartorius said.

January’s headline sales figures had been bolstered by comparisons with a year earlier when non-essential retailers were closed due to lockdown restrictions.

Quarterly CBI figures showed that retailers raised selling prices by almost as much as in late 2021, which saw the biggest price rises since 1990.

Prices are expected to rise even faster over the next three months, the CBI said.

Previously released official data showed that British retail sales grew faster than expected in January as the impact of the Omicron wave of coronavirus cases eased. But analysts have warned of a tough year ahead as inflation rises to a 30-year high, squeezing households’ disposable income.