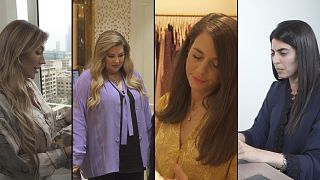 More and more women are taking the plunge to set up their own business in Dubai, from food and beverage outlets to consultancies and retail stores.

One factor enabling this is the infrastructure that female entrepreneurs and stakeholders in Dubai's startup ecosystem are now able to access. This includes incentives such as additional funding and encouraging business licensing schemes.

For two years, Coralie Francois-Dolidon dreamed of starting her own fashion business as she worked as a buyer in Dubai. She felt there was a market for small independent designer fashion labels. After carefully studying the market, she found that setting up a company was more straightforward than she could have imagined.

Fast forward five years and she now owns five stores across the city. Coralie, who founded multi-brand fashion retail company Maison Clad, told Euronews it has been challenging but worth it.

“Today I'm like a seller, an accountant, a buyer still, of course, a marketing manager. I can now develop a website. It has been an interesting five-year journey.”

PureBorn is an organic and sustainable nappy company that was founded in Dubai in 2017 by Hannah Curran. It has now expanded into 14 countries.

Hannah says that being a female entrepreneur is not an easy journey and is not for the faint-hearted, but there is support in the shape of male and female mentors as well as female-only networking and support groups in Dubai.

She added that the fundraising aspect of the business is still challenging and is a global issue.

I think two per cent of all VC money actually goes to female-founded businesses worldwide, which is shocking.

“I think two per cent of all VC money actually goes to female-founded businesses worldwide, which is shocking, and the numbers don't lie. So, I think on the fundraising side, we need a push towards female entrepreneurship. But generally, in Dubai, we have a great network of support and mentorship.”

According to data analysts, Magnitt, 11% of Venture Capital funding in 2021 in the United Arab Emirates went to female-only founders, compared to the international average of just 3%. 13% per cent went to joint female and male founders, and over three-quarters (76%) went to male-only founders in the UAE.

Reem Abou Samra is the founder of LaLoge Beauty Lounge with branches in the Address and Mandarin Oriental hotels. She opened the sixth branch of her hair and beauty spa during the pandemic, a time when many were closing down.

She says that although many women are doing well, they could enjoy greater success by supporting each other.

“I feel we could do better if we have more organisation for women entrepreneurs - it would bring a positive impact. Every business is very challenging, but also at the same time, [it] will give you a lot of happiness when you see that you are successful.”

Focus on what you do enjoy and then the rest comes.

It is not just female entrepreneurs that are pushing the envelope in Dubai. Dr. Saeeda Jaffar is the SVP & Group Country Manager for Visa in the GCC region. An Emirati national with over 20 years experience in the region, she told Euronews there are few places in the world that are as welcoming and as openly inclusive.

She offered some advice for succeeding in traditionally male-dominated industries.

“Focus on what you do enjoy and then the rest comes. And if that's how you go about it, I think it matters much less, whether it's a traditionally male-dominated world or not. That being said, I think it always helps to have role models, and it always helps to have other people around you who have perhaps gone through a similar path and seen similar things. I know certainly at Visa we do a lot of that.”