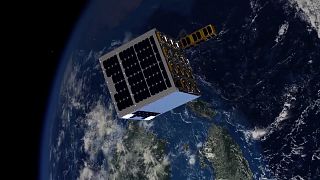 Space science has taken a giant leap in the past year. Virgin Galactic, Blue Origin and SpaceX all flew their first tourist-focused missions. Meanwhile, NASA successfully landed its rover on Mars, and the James Webb Space Telescope - the world’s most powerful of its kind - blasted off into orbit days shy of the new year. More money than ever is being pumped into space technology, with Morgan Stanley forecasting the industry to top one trillion dollars by 2030.

Private investments in space companies topped $10 billion last year - the highest it’s ever been. 2021 also saw a record 132 successful orbital launches, with China and Elon Musk’s SpaceX landing a mix of private and government funded missions. There will also be renewed efforts to return to the Moon and more missions to the Red planet.

Exploration in the final frontier

One company that’s been at the forefront of space exploration is Virgin Group. Its subsidiary Virgin Orbit was founded in 2017, but it’s been part of a space programme that began in the mid-1990s.

We can take an airport anywhere in the world and within a few weeks, turn it into a spaceport.

The race for space is fierce, but President and CEO Dan Hart told The Exchange Virgin Orbit was doing a number of things to stay ahead of the competition.

"We brought new technology. Last year was the first time a liquid rocket ever left an airplane and ended up putting satellites into orbit for the first time in history. It's been talked about for decades and tried a few times. Our rocket, for instance, has two engines on it, one for each rocket stage. Our competitors have five engines, 11 engines. That translates into enduring disadvantages in cost and reliability. And then there's the flexibility aspect that gives us reach into markets that others can't. I mean, we can take an airport anywhere in the world and within a few weeks, turn it into a spaceport.

Virgin Orbit has started the year off with a bang with a listing on the NASDAQ and a rocket launch. Hart confirmed the company has further launches planned later this year in the UK and Japan.

While space launches are set to skyrocket in the next few years, what about missions from the past? Since the 1950s, thousands of rockets have been sent to space, leaving behind debris and many dead satellites that are just floating about. NASA says around 23,000 pieces of debris larger than a softball are orbiting the earth as we speak. It all may seem harmless, but at speeds of up to 17,000 miles per hour, that could damage a satellite or spacecraft.

One company on a mission to help clean up space is D-Orbit. Based in the Italian town of Fino Mornasco, just north of Milan, the firm brands itself as a space logistics company.

Each of the firm's launches carry multiple items in tubes that can be hired to get something into orbit. But here's the interesting bit. Once the cargo in these tubes are released they begin the search for decommissioned satellites to strip them of valuable materials, recycling them to repair or refuel other satellites. The company has received millions of dollars in investments. Their goal is to make sending things into space a commonplace activity - while ensuring the practice is sustainable from the start.

We wouldn't even know about climate change if it weren't for space.

Chad Anderson is the CEO of Space Capital, a VC firm tracking more than 1,500 space tech companies with $200 billion in global equity. He insists the space race is not just a fancy trip to the next frontier but is helping to fight some of the biggest challenges facing the planet.

"The one thing that I think gets lost in the noise is that we wouldn't even know about climate change if it weren't for space. To address challenges of this scale, we're going to need global solutions, and the only way to do that is with satellites."

So the space race is heating up and the focus for business is extending far beyond intergalactic tourism. Record investment promises to take the space economy to new heights over the next few years. And as investment in space tech shifts into areas like sustainability - perhaps those lessons being learnt from above can help protect our climate and save our way of life here on planet earth.