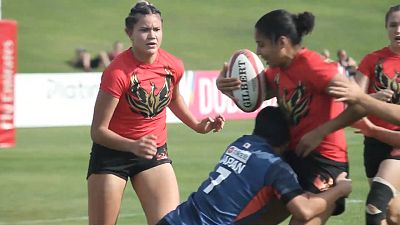 Over the last two years, sporting events around the world have been postponed, altered and even cancelled due to the coronavirus pandemic. But as tournaments slowly start to return, what does it take to host them? And are they now ready to welcome fans again? Focus heads to Dubai to find out.

In the UAE The Emirates Airline Dubai Sevens is returning after a one-year hiatus due to COVID-19.

General Manager and Tournament Director of the Dubai Sevens, Thomas Burwell, said they were keen to welcome fans back. Speaking ahead of the launch he told Euronews: “For us, we're just excited to open our doors… Dubai has proven time and time again throughout this pandemic just how well-placed it is to serve global sport.”

The Sevens event which is over fifty years old, has over 4,500 participants and attracts 100,000 fans. Mr Burwell added that safety was a priority in the decision to bring the event back.

Another tournament that recently made a triumphant return to Dubai was the ICC Men's T20 World Cup. It attracted thousands of fans of all ages across the four-week tournament with capacity capped to meet safety requirements.

The Gulf welcomes back Golf

After being held without fans last year, the DP World Tour Championship (which features 50 of the world's best golfers for its season-ending finale) took place at Jumeriah Golf Estates.

Tom Philips, Head of Middle East for the European Tour, said it was a real priority for organisers to open the event to all after what has been a tough 18-months.

“It was really important that we engage not just with golfers, but with the whole wider community. So that's why you'll see, you know, a serious golf tournament going on and lots of people going out to watch that.

“But it’s also for all the family. It's a really fun atmosphere over the weekend and that's what we're really trying to achieve," he added.

...the city's infrastructure and response to the pandemic... was crucial in making these tournament's possible.”

Dubai is well known for playing host to a wide range of championships, from chess to karate and tennis. It is also famed for hosting the Dubai World Cup – one of the richest horse races in the world, which will also be making a comeback following the pandemic.

The Asia Pacific Amateur Championships were moved to the Dubai Creek Golf Club after the original host nation had to withdraw due to safety restrictions.

Adel Zarouni, Vice President of Emirates Golf Federation said it took the team about a week to decide if it was possible.

“Usually, a tournament like that takes a year to prepare, and there are about 300 people who were flying in from all over the world.”

He told Euronews, “We have the facilities, we have the experience of organising things from football to rugby cricket.”

The tournament went ahead with Keita Nakajima being crowned champion.

Mr Zarouni said: “It has been the city's infrastructure and response to the pandemic that was crucial in making these tournament's possible.”

And as the year draws to a close, Dubai is reflecting on how through safe practises, they can host more championship tournaments to the city throughout 2022.