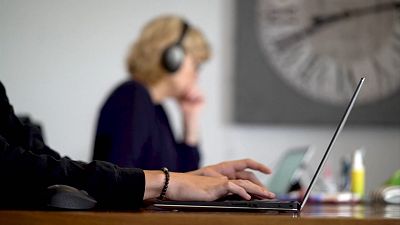 In this episode of The Exchange, the team look at the expanding cloud sector and business analytics boom, asking what the tech giants are actually doing with our data and what it means for our privacy.

Head in the cloud

Whether we like it or not, technology is changing the way big corporations store the information they hold about our lives. There was the punch card in the 19th century, a floppy disk in the 1950s and the USB flash drive in the early 2000s. But now, cloud technology - the practice of storing data remotely rather than on local servers or computers - is fast becoming the norm. And companies are betting big on this virtual future.

Spending on big data and analytics solutions was expected to hit $215 billion in 2021 - or around €190 billion - while the compound annual growth rate for global BDA spending over the 2021-2025 period is forecast to grow by 12.8 percent.

It's providing the right solutions for our customers at the right time and that focuses right now, very heavily around hybrid work.

IT services and software are the two biggest segments companies are looking to expand. Cloud technology means data is accessible at any time, and anywhere with internet access. Experts say that as cloud tech improves, the service will become less and less expensive. One company that has spent billions on cloud technology in recent years is Cisco.

Chintan Patel, Chief Technology Officer for Cisco UK & Ireland told The Exchange: "It's providing the right solutions for our customers at the right time and that focuses right now, very heavily around hybrid work.

"What the conversation really is about now is around the way applications and services are consumed more digitally, which is led through applications. You know, the urgency and the need to connect remote workers provide collaboration tools have virtual health care appointments, education that's kind of really driven the transition more so towards cloud in terms of getting scalability and agility. So the idea is trying to find the best mix of technology and be able to allow our customers to manage those environments in a secure way," Patel says.

The business of big data is booming, but concerns remain about what companies do with information they collect on us. There’s always a risk of a data breach - we’ve seen it with credit card companies and telecommunication services. How safe is it to store our information in the cloud, and how far should governments go to put pressure on big tech companies to protect people’s data?

Daniel Newman a Founding Partner and Principal Analyst at Futurum Research says: "There's a bit of a bifurcation in market perception here. So I know we're trying to change laws globally to regulate more and more stringently. But at the same time, I think there's a real tricky situation for regulators and governing bodies around the world to figure out how we keep consumers happy but can currently regulate big tech in a way where they're forced to be more transparent, to be more open in how they collect and utilise data? Just in general, what companies might know about us that could be harmful or, of course, can be very beneficial from their standpoint of go-to market."

The data and privacy tug-of-war is more fragile in places like Hong Kong, which has seen widespread anti-government protests. The authorities there recently changed online privacy law in what they claim protects people from ‘doxing’ - the act of maliciously exposing a person’s data online. But critics, including big tech firms, question whether it’s a tool against freedom of expression.

“Particularly in 2019, there were about 5,000 cases, where people’s personal information and personal data was used in an intimidating way. Now the law has been changed, so now doxing has been criminalised,” says Hong Kong's Former Privacy Commissioner Stephen Wong.

The changes mean many in Hong Kong may have different expectations for data privacy than they did a few years ago.

For digital privacy specialists, however, there is a darker cloud on the horizon. Talk of a new data law from China are not just looming over Hong Kong, but the whole of Asia, and its implications could be even more significant, says Alex Hill, a digital data privacy specialist and lawyer

“The PIPL would apply in Hong Kong or anywhere else in the world, let's say if somebody in Hong Kong is providing goods and services to people in China or monitoring their behaviour.”

Hong Kong’s government had harboured hopes that the city could become a data and innovation hub in Asia. But with an increasingly complicated web of rules, data security and privacy in the region may soon look very different.