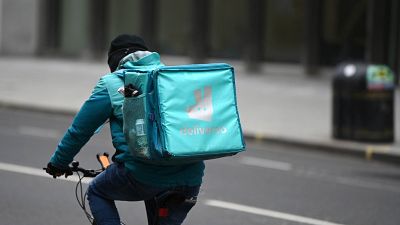 A group of Deliveroo riders were dealt a blow in a court ruling this week when their efforts to be reclassified as contracted employees of the popular takeaway app were denied.

Deliveroo hailed the ruling as “a victory” although the judgment related to only a small minority of riders working as independent contractors.

The court was asked to weigh two statuses - those of salaried employee or independent contractor - but it ultimately determined that the categories were “not applicable” to services offered by online platforms according to union representative, Martin Willems.

He said only that 15 per cent of Deliveroo riders in Belgium work under independent contractor status, while the rest are under a "collaborative economy" category for those who make money from sharing activities proposed by platforms.

The latter category, introduced in 2016, allows people to engage in the gig economy by providing occasional small services to top up their other revenues, but offers no social security coverage.

With more and more jobs created by digital labour platforms, we need to ensure decent working conditions for all those deriving their income from such work

The Belgian judgment was handed down just days before of a proposal the European Commission presented on Thursday, which set out criteria to determine whether a worker in Europe using Uber, Bolt or Deliveroo should be considered an employee of the company or not.

The criteria includes whether an app determines pay levels for workers, makes demands on appearance such as the use of uniforms and equipment, or restricts a worker's ability to refuse jobs.

"With more and more jobs created by digital labour platforms, we need to ensure decent working conditions for all those deriving their income from such work," EU executive vice president Margrethe Vestager said.

The proposal from the Commission "will help (the) false self-employed working for platforms to correctly determine their employment status and enjoy all the social rights that come with that," she added.

Under the proposal, if criteria is met then the platform worker will automatically be reclassified as an employee with rights to collective bargaining, minimum wage, paid leave and sick leave.

The draft rules could still take years to come into force and will have to pass scrutiny and amendments in the European Parliament.

Platform firms broadly criticised the plan, saying it would cut work for those who prefer the flexibility of self-employment.

Uber said the commission's proposal would put "thousands of jobs at risk, crippling small businesses in the wake of the pandemic and damaging vital services that consumers across Europe rely on".

Delivery Platform Europe, which represents Uber Eats and Deliveroo among others, said the rules would bring "negative outcomes for couriers themselves as well as for restaurants and customers".

Is this Bitcoin's inventor? Man in US wins $50bn crypto legal dispute