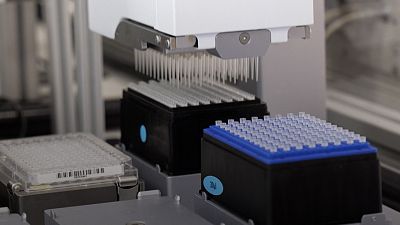 A university in Sweden is using a so-called “robot scientist” to speed up its search for a cure for COVID-19.

The robot scientist, named Eve, is an AI-driven laboratory system that can automate research tasks like testing chemicals, planning and carrying out experiments.

“Eve will go through the entire list of chemicals she has, and try to find the same structure. So she chooses what will be the next step, depending on the previous one,” said scientist Ivgeniia Tiukova.

This will free human scientists to make the high-level creative leaps at which they excel, and thus contribute to solving societal challenges.

Medical researchers at Chalmers University of Technology in Gothenburg say Eve is able to take on work that human scientists would otherwise have to carry out, freeing them up to focus on more challenging tasks.

“We test a few thousand, it will take a while, but this robot is fast,” said Chalmers professor of chemistry Per Sunnerhagen.

Eve started life at the University of Manchester in northern England, where she was involved in finding treatments for malaria.

Eve’s developer, British scientist Ross King, said in a statement that he hoped she would enable Chalmers researchers to spend more time being creative.

“This will free human scientists to make the high-level creative leaps at which they excel, and thus contribute to solving societal challenges,” he said.