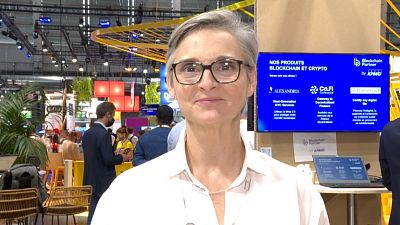 The COVID-19 pandemic is challenging the survival of start-ups and forcing them to adapt but hope is on the horizon, according to the chairman of KPMG France.

In an interview with Euronews Next, Marie Guillemot spoke about the challenges Europe’s start-ups will face in the post-COVID economy and how they can come out the other side.

"We are in a tricky period where we need to innovate or to reinvent our business models and I'm really optimistic for Europe and Europe’s economy and start-ups," Guillemot said.

At the start of the pandemic, intergovernmental economic development body the OECD said most start-ups faced "significant challenges" and were more vulnerable than established incumbents to the shocks brought on by COVID-19.

Start-ups were put in danger as they tend to engage in higher-risk activities than other small and medium-sized firms (SMEs) and face constraints in accessing traditional funding, the OECD said in May last year.

But the economic outlook is brighter this year. Earlier this month, the European Commission raised its forecasts for EU growth in 2021 to 4.8 per cent. It comes after a record contraction of 6.2 per cent last year.

If its prediction proves accurate, it would mean the bloc’s economy would regain its pre-COVID output by the end of 2021. However, this does not factor in the possibility of a new wave of infections driven by variants of the virus.

"Now, we are considering a new phase of the rebound where digital is very much at the core of the new business models," Guillemot said.

"But companies are reinventing their new ways of working in a hybrid mode where the digital and physical work is at stake".

A key area to watch is the start-ups working to provide companies with e-commerce sites and new technologies, Guillemot said. Large and more established tech groups are also making progress in terms of accelerating digitalisation within companies, in "a new way of constructing or reinventing new business models," she said.

KPMG believes funding emerging sectors of the economy that include green and digital will enrich not just the economy but society too, Guillemot said.

How can startups survive?

"Startups in Europe need to have big dreams because they absolutely need to go for large markets and to accelerate to scale up very fast," she says.

But to do so, financing is crucial, she said.

"In terms of the digital and green economy, most of the ideas may be already put on the table, but now we need to finance all these ideas and all these new business models".

Providing equity funds, Guillemot said, is one solution to scale up start-ups as are public bank funding and government measures.

"We need to also be the financing environment that could replace the US because we all know that we have small financing in Europe and we could have a larger one than in the US".

In Guillemot’s view, Europe’s start-up market is having a moment and there is plenty to be optimistic about.

Figures from Dealroom show start-ups in the continent raised €43.8 billion in the first six months of 2021, far more than during the whole of 2020.

Another reason Guillemot feels "positive" about the future is that we share common values when dealing with technology.

"We have this very enthusiastic movement of people, of the young generation, that want to be committed to this new world, to this greener economy to engage in a more inclusive way of working and of living," she said.

How to make your start-up business sustainable from day one