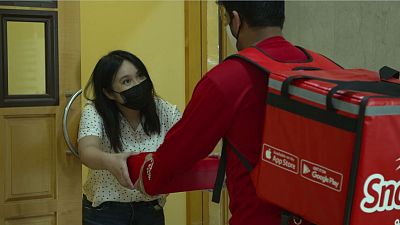 Working from home has become increasingly popular, necessary and in many cases compulsory due to the pandemic.

A recent study of corporate executives around the world found 19% said they expected employees to work three or more days remotely post-pandemic.

These results showing a shift towards working from home is mirrored in other studies from the US to Europe.

The tech that makes working from home possible

Adam McHale is the European Vice President of Cisco, a company that builds the technology that enables people to work from home. He told Euronews' The Exchange that due to the pandemic, "broadband infrastructure became critical national infrastructure". He added that internet traffic grew at a rate we would normally see in the space of 18 months in the space of a few days.

Cisco did a survey of 13,000 people across six different countries and 78% of them told the company that broadband connectivity "was absolutely critical to them".

'We can't put everybody in the same box'

Estonia is a nation pushing the boundaries of remote and home working, often hailed as the most digitally advanced country. It is the nation that gave us Skype and made internet access a basic human right.

Its Minister for Health and Labour, Tanel Kiik, gave us his thoughts on how we should approach this new way of working.

He said that he thinks the changes to the way we work and the new forms of work are "only a positive thing". "We can’t put everybody in the same box and say that this is your work contract and these are your working hours and this is your salary and be happy with that," he added.

For a long time, this sector has been popping up on the news and not always for positive reasons, including cases of employment disputes and claims of infringement of workers' rights.

But what exactly is the gig economy?

Dictionaries describe it as "a job market which consists of short-term or part-time work done by people who are self-employed or on temporary contracts". However, this definition leaves out online platforms that many have started associating with it. In its simplest form, the gig economy can be described as flexible, temporary, or freelance jobs that often involve connecting clients or customers via apps and websites.

Its advocates say the new mode of work allows employees, businesses and consumers to adapt quickly to the needs of the moment. They also say it can also give workers more flexible hours to fit their lifestyles.

Kiik believes that the gig economy is something that is here to stay and is likely to grow in popularity. For that reason, he doesn't see any point in fighting against it. "The world is changing constantly, the economy is changing and of course the work market and the jobs market are also changing", he adds.

Brands like Amazon and Alibaba have created profound changes to the way people live and work. Despite these billion-dollar success stories, people are still divided about the gig economy.

Qatari startup Snoonu, which offers a one-stop application that facilitates online shopping and deliveries, relies on the gig economy but is trying to remedy flaws in the mode of work's fabric.

It has some 600 drivers poised to react to the ping of an order for thousands of locations around the country who are fully trained by the company. It also has over 250 young employees from 35 different countries whose jobs are constantly evolving thanks to digital innovation.

The world of recruitment is also transforming to match new employee and employer needs. Juliet Eccleston is an employment expert and she told The Exchange that when people are straight out of college, it's often "difficult to see the difference" on their CVs.

To her, and new employers like Snoonu, what makes people stand out are their vocational experience. "A lot of younger people have gone onto platforms and they’re actually micro-entrepreneurs behind the scenes, sharing things, renting things out and selling goods," she explained. "Those kinds of skills are actually incredibly interesting for businesses".

Whether employees are working from home, on a temporary contract, or on flexible hours, one thing is for sure; the future of work is changing.