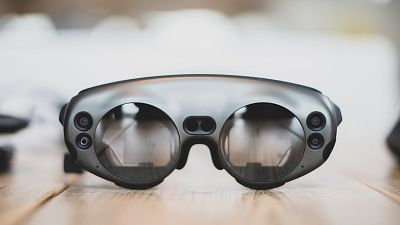 At 3.28 AM on October 25, 2020, conjoined twins Abigail and Micaela Bachinskiy were finally separated following a 24-hour operation at UC Davis Children's Hospital in Sacramento, California.

The girls were craniopagus twins – a medical term meaning they were born joined at the head.

Their 30-strong medical team spent ten months preparing for the operation, using MRI and CAT scans to build a virtual map of the inside of the girls' heads and studying it in 3D using augmented reality (AR) headsets.

"They essentially put the 3D scan of the brain in the middle of the room, and all of the surgeons and the support personnel could see the same thing," Peggy Johnson, CEO of AR company Magic Leap, told Euronews Next.

UC Davies' surgeons used the Magic Leap 1 headset to study the complex web of blood vessels inside Abigail and Micaela's heads, giving them a way to visualise the veins they would have to detangle and separate long before the twins entered the operating theatre.

The procedure was a much-needed success, both for Abigail and Micaela, and for Magic Leap.

Making the leap to AR

The operation last October followed a challenging period for the company, which reportedly laid off up to 1,000 employees last year, despite having raised $2.3 billion (€1.9 billion) in funding since 2014.

Originally started as an entertainment company in 2010, Magic Leap later moved into AR.

It initially struggled to sell its headset to consumers and pivoted to marketing it as a solution for enterprise, a path that Johnson, who joined the company last August, has been keen to pursue.

"We had some turbulent times in the years previous, but all that has settled," she said.

"We've got a great team. And we've been hiring quite a bit recently, we've made some executive announcements. And so, you know, all the cylinders are firing right now in a good way," Johnson said.

"Now we have a much better path forward. We're focused on industries like health care, manufacturing, public sector; ones that are used to wearing displays on their eyes and now we're supercharging them with augmented reality".

Adjusting to the new normal

Magic Leap hopes that the shift to remote working as a result of the COVID-19 pandemic will give some industries an incentive to invest in AR tech.

"If you think about design teams who previously had come together in a room to design a car, or shoes, or anything, now could design literally, with their teams being anywhere. They put the device on, and in the middle of their living room, they have the car," Johnson told Euronews Next at the VivaTech 2021 conference in Paris.

"The future of work is in the midst of changing right now, I think we will likely never go back to 100 per cent of our workforce in the office, nor 100 per cent of them at home, but something in the middle," she added.

If she's right, the shift could represent a sea change for a company that, according to Bloomberg, was struggling to find a buyer in March last year.

"Think of it a little bit as the mobile phone industry in the early years. They were big, and they were expensive, but they delivered value for enterprise. So that is sort of the stage of augmented reality. We're focusing first on enterprise and eventually we'll get to consumer use cases," Johnson said.