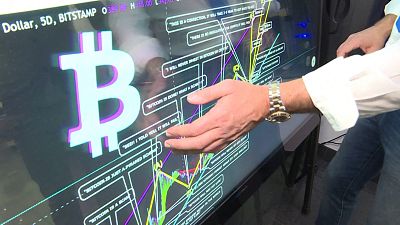 Cryptocurrencies and in particular Bitcoin have been making headlines worldwide, but there's still a lack of understanding about what they are. Dubai recently held the AIBC summit to bridge that knowledge gap.

Eman Pulis, Founder and CEO of sigma group & AIBC Summit, says although there are technical sessions at the event, they also want to reach those new to the industry:

"An issue of empowerment is key. If we want one day to see the crypto community, the blockchain, be embraced by the masses."

Put simply, cryptocurrencies are virtual, unlike a euro or dollar that we can hold physically. They aren't usually tied to a bank or government and allow users to spend money anonymously through a series of complex transactions using blockchain technology.

Worldwide some businesses take crypto as payments, but overall mainstream acceptance is still limited, something Dubai is keen to change. One of the first steps was the launch of the DMCC crypto centre.

Ahmad Hamza Executive Director of DMCC Freezone says the centre wants to provide an array of services for crypto and blockchain companies and platforms to help them not just set up, but also flourish and succeed.

Events like the AIBC summit bring together key individuals and brands from AI to blockchain and the Internet of Things to discuss and shape the future of emerging tech. A key guest was the blockchain co-inventor, whose research Bitcoin was based on.

In 1991, long before bitcoin, Dr Scott Stornetta and Stuart Haber became the co-inventors of the early blockchain.

“We took all the data in the world broken up into blocks and by linking them together, it is a way of guaranteeing that no one can tamper with the record. That makes it all something everyone can trust”, Dr. Stornetta says.

Dr. Scott Stornetta admits that there is some skepticism like there was in the early days of the internet.

“There were many things that in fact were fake and scams. Yet over time, we developed a secure foundation that allows us to create much more value”, he adds.

The cryptocurrency market has also been susceptible to extreme volatility, with social media comments from public figures like Elon Musk raising questions about the market, which can potentially affect investors.

Brock Pierce, Chairman of Bitcoin Foundation & co-founder of Tether & Mastercoin, says he urges people to research and form their own opinion on cryptocurrencies.

“The best way is to figure out what this is all about so that you can make an informed decision for yourself. And then with that knowledge, you'll be able to make decisions as to whether or not if, you know, if you agree that this is, you know, going to be a big part of the future, clearly I have that view.”

While some banks, financial services companies and governments are embracing cryptocurrency, others are staying away. But for those investing, they see digital currencies and how they work as the future.