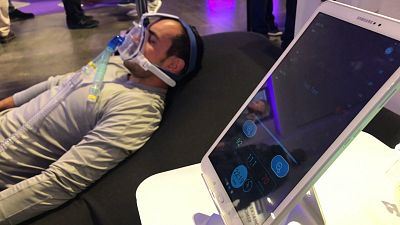 A growing number of people want to make their bodies and brains function better by hacking their biology. No longer seen as a Silicon Valley trend, the biohacking movement is gaining popularity in Dubai.

Enthusiasts take a do-it-yourself approach, making lifestyle changes to improve their health. At the extreme end of the spectrum, this can include implanted devices and gene editing. However, critics warn of serious health risks.

Medical Director & Functional medicine practitioner at DNA Health, Dr. Nasr al Jafari, says Biohacking is a term that people have started to apply "to either optimising performance, whether that be cognitive, mental state, physical performance, or people who are looking to live longer and live healthier during that lifespan".

For many, hacking is a simple and easy way to bring about effective change in their daily life. But can the body really be hacked?

Dr. Nasr al Jafari tells Euronews that "there is some solid, mechanistic grounding in a lot of these interventions. But, like anything, you're going to get people hijacking the arena and without any kind of scientific basis, they may have just heard someone talking about it or seen it in the media, which necessarily doesn't have any scientific grounding."

Asim Janjua is the founder of Mamo and has been a Biohacker from before he even knew what the term meant.

"I think there's a lot of association with biohacking and supplementation, which is good. But at least in my opinion, that's level three of biohacking," he explains.

"The first level for me is having a good regimen around food and being able to understand what you're eating and eating good food. Stage two of all of this is just having a good physical activity regimen as well. I also believe that that puts the onus on you, right? And takes away from this magic pill or supplement that you can take to get these benefits and enhancements,” he adds.

Ice baths, intermittent fasting, wearables that monitor heart rate and steps, and drinking mushrooms instead of coffee are all practices that have gained traction.

Biohacking is something many of us have already dipped into from tracking our sleep, nutrition, activities and heart rate. For those willing to experiment further, science and anecdotal evidence suggest the risks are higher, but the rewards potentially greater.