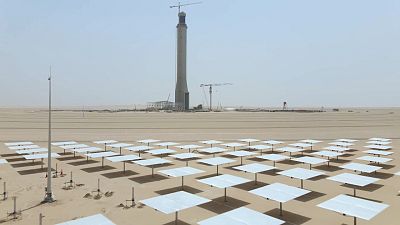 The United Arab Emirates might be known for its sizable oil and gas reserves, yet it also has one of the highest solar exposure rates globally.

It is home to the Mohammed Bin Rashid Al Maktoum Solar Park (MBR Solar Park), the world’s largest single-site solar park according to the Dubai Electricity and Water Authority (DEWA).

The energy plant covers 44 square kilometres in Dubai’s southern desert and is equipped with millions of photovoltaic panels that convert the sun’s rays to about 1000 MW hourly that are capable of powering around 320,000 homes.

The solar park is majority-owned by DEWA at 51%, with stakes from the Riyadh-based ACWA Power and China’s state-owned Silk Road Fund at 25 and 24% respectively.

Established in 2013, the MBR Solar Park is set to reach its fifth and final phase in the next couple of years and is projected to offset 6.5 million tons of carbon emissions annually.

This is the equivalent of taking around five million passenger vehicles off the road yearly, according to US Environmental Protection Agency calculators.

Achieving such feats involves an early investment strategy, particularly in human capital, which is the purpose of the recently opened Solar Innovation Centre.

“When you educate the youth from a young age, basically they are aware of the challenges that are being faced by solar from now, and how they can basically look at addressing these challenges” the centre’s director Dr. Aaesha Abdulla Alnuaimi told Euronews.

She cites the region’s harsh environment as obstacles to technological growth. High temperatures and strong winds are just some of the factors that affect the performance and long-term reliability of renewable technology systems being used.

“Addressing the dust, for example, there is the robotic cleaning but there is a high cost in implementing robotic cleaning,” says Alnuaimi. The same applies to using anti-soiling nanotechnology to ward away the effects of commonly occurring sand and dust storms.

“This is why we need more research and more innovation,” she told Euronews, in order to find solutions.

It has developed metallic trees with sprouted photovoltaic leaves in addition to solar-powered street lamps and pavements.

The MBR Solar Park claims many world records with its projects, including the construction of what will be the world’s tallest concentrated solar power (CSP) tower.

The solar spire stands at about 260 metres high, which is roughly 60 metres short of Paris’ Eiffel Tower.

It will use around 70,000 heliostats like mirrors to magnify the sun’s rays into thermal energy and store it for about 15 hours - able to provide electricity around the clock, solving a major issue with renewable technology.

The installation is part of the project’s fourth phase, which plans to double its energy production upon completion.

Before that, the Emirate was nearly 100% reliant on natural gas while the whole of the UAE is still dependent on fossil fuels for its energy needs.

Looking forward, the country is looking to make greener changes with its unified Energy Strategy 2050, which aims to reduce its carbon emissions from power generation by 70%.

This is a goal that some experts say requires allowing more, and likely foreign, investment to advance its renewable sector.

“Deregulating the energy market, thereby lots and lots of players are allowed to participate in the energy system,” says Dr. Jagannathan Ramaswamy, a Dubai-based independent energy and sustainability specialist.

“So, when we allow players, they are obviously going to invest money.”

In Dubai, DEWA says it has attracted about €9 billion in investments in public-private partnerships.

In line with the 2015 Paris Climate agreement goals, the UAE is using such investment to build a combination of solar, nuclear, and other renewable energy sources, which will create a need for smarter grid management systems.

“The mantra is decarbonization, decentralization, and digitalization,” says Ramaswamy, who forecasts that the final stage will incorporate big data, artificial intelligence, and blockchain into the mix to coordinate the new normal of powering cities.