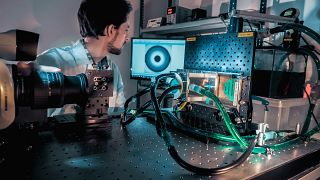 Heart disease is the leading cause of death globally but two French medical technology companies are making strides in care for those suffering from advanced or terminal heart failure.

Around 60 million people are affected by heart disease in the world, prompting some cardiologists to call it a pandemic. The outlook for severe cases is not bright, there’s only a 50 per cent chance of surviving for five years and it is an illness that almost always kills.

The best solutions currently available include heart transplants, which are very limited due to the supply of organ donors.

The other is a heart pump installation, which often leads to complications such as strokes and gastrointestinal bleeding. Those with traditional heart pumps, known as left ventricular assist devices, can also have heart failure when doing even moderate exercise.

But medical technology advances may shake up the bleak prognosis.

An artificial heart by the company Carmat will go on sale in the second quarter of this year in Germany and France under the brand name "Aeson". The device is designed to mimic a real heart and is powered by batteries.

Meanwhile, French start-up CorWave is developing a heart pump that replicates the blood flow and pressure characteristics of a human heart, instead of delivering a constant supply of blood at an unnatural level.

"We want to save patients' lives, but not just save them, we want them to have a fully active life".

CorWave’s pump works through its breakthrough technology it calls a wave membrane, which is inspired by the movement of marine animals. It is this fluid movement that allows the pump to closely replicate the function of the heart and which the company hopes will be as effective as a heart transplant.

As traditional pumps can cause severe complications, it means many people are not eligible. But CorWave's technology could reach more patients.

The technology has been in the works since 2012 and the company is nearly at the end of the required 10 years of engineering.

In January, CorWave made history after the European Commission became a shareholder in the company – the first time for a private company since the Commission’s founding in 1957.

"It's a historic investment and is really great news for Europeans because we don't invest as much as in China or the United States in disruptive and impactful innovations, which is a loss for Europeans and humanity," de Lillers said.

Europe’s investment into CorWave, alongside funds from other investors, will allow the company to finalise the product’s development, expand manufacturing and infrastructure, complete regulatory testing to conduct human implants and start its human clinical trials.

The potentially life-saving technology could be on the market within the next four years.