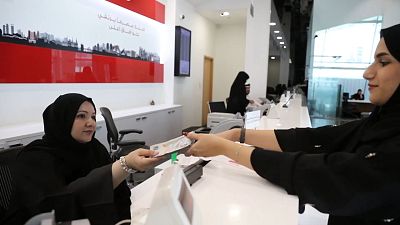 Valued at over €1.7 trillion the Islamic economy is big business. In this episode, Target talks to industry insiders hoping to position Dubai as a regional hub.

The UAE has been ranked amongst the top three Islamic economy countries in the world, according to the 2020 State of the Global Islamic Economy report. Malaysia continues to hold the lead, followed by Saudi Arabia. Put simply, the Islamic economy is a category for businesses, finances and investments that are compliant with Islamic principles and values.

Over 2019, there were €2.4 trillion invested in Islamic finance assets. 1.9 billion Muslims around the world spent €1.7 trillion across the Islamic economy. Halal food, modest fashion and media and recreation being the top three sources. Set up in 2013, the Dubai Islamic Economy Development Centre (DIEDC) was established to transform Dubai into the global leader in this area.

Abdulla Mohammed Al Awar, CEO of DIEDC believes the report on the State of the Global Islamic Economy is a vital tool: "So what this report provides is actually a resource. And in terms of what are the key investments in the various sectors of the Islamic economy, how much did the consumers actually spend in the products and services that comprise the Islamic economy? So it's a very good source for companies, as well as governments to find out where the trend lies.

A 2018 Techsci research report estimated the UAE halal food and beverages market is projected to surpass €4.6 billion by 2022. An increasing Muslim population, rising per capita income and growing e-commerce are among the major factors boosting demand. Another factor is the rising acceptance for halal food among non-Muslims.

At Prairie Foods they follow stringent regulations and policies regarding halal food and beverages.

"We are going to all the different restaurants, obviously very high end restaurants. The consumers, most of them, or some of them are not Muslims....it's not really a requirement for them. But we are able to service this,'' explains Whaid Kandil, Prairie Halal Foods General Manager.

The importance of fashion

In Dubai a fast growing and relatively young population of Muslims is increasingly asserting its Islamic sensitivities in the marketplace to products as varied as food, banking and finance, extending all the way to fashion, cosmetics, travel and healthcare. The clothing industry has seen its popularity swell in the region and beyond.

Amal Murad, a fashion Designer told Euronews: "I get many enquiries from lots of regions, like Muslims in Europe, and even I have non-Muslim friends...they like to wear my clothes, not just when they come and visit us here, but even back home."

Those working within the Islamic economy are focussing on recovery post-COVID-19. The state of the Global Islamic Economy report forecasts by 2021, GDP and employment will not only have bounced back, but growth will be beyond pre-pandemic levels. The report estimates advanced economies that were hit hardest will recover quickly and begin to outperform emerging markets and global growth overall. And with the global Islamic economy valued at over $2 trillion, Dubai will be looking to claim its slice of the lucrative pie.