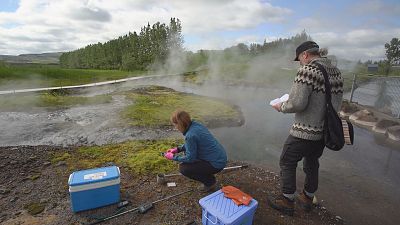 Geothermal hot springs in Iceland are not just beautiful ecosystems - they are also home to countless viruses that could be key to innovations in the medical, biotechnology and molecular biology fields.

In this week's episode of Futuris, Euronews travelled to Iceland to see how researchers are hunting down viruses - and exploring their potential uses as part of a project called Virus-X.

Most viruses that live in extreme conditions, like those in Iceland, often only infect bacteria. They are not harmful to humans.

Researchers are going to geothermal hot springs in the country to hunt the viruses down - and understand if they can be used to eventually help improve our health.

Each virus carries its own genome, harbouring genes that allow its successful propagation.

Further research into this is being carried out at the research institute in Iceland to unveil the genetic secrets.

Elisabet Eik Gudmundsdottir is a biotechnology programme manager at Matis.

"Getting the conditions right to open up the viral capsules is an important step in this because we want to open all the viruses, so we get all the diversity in the sample, but we don't want to ruin anything. We don't want to do anything harsh. Because we don´t want to ruin or lose the DNA before we can capture it and collect it for sequencing".

Sequencing of the viruses´ genomes is done with sophisticated equipment.

Scientists from the European research project also use bioinformatics algorithms to identify the genes.

Researchers have so far established a database of 50 million genes of viruses.

Jörn Kalinowski is a biotechnologist at Bielefeld University. He explained to Euronews how viruses can become marketable products.

"We are the ones who stand between those people who understand biology, those who are on the spot, those who understand ecology and those who make products out of it. In other words, we do the molecular analysis that helps the experts after us to find the right targets, and then perfect these targets for use as molecular tools".

Promising gene products, especially enzymes, are then studied at a structural level with 3D graphics to further establish their potential to develop marketable products, like biocatalysts.

"Biotechnology needs enzymes that are very clearly defined, and have a very well defined mechanism for the particular applications. So in order to optimise the enzyme for exactly the application that is needed by industry, we need to understand how the enzyme functions and that is exactly what we do," Dr Ehmke Pohl, a structural biologist at Durham University explained.

Viral biological diversity is the largest unexplored genetic reservoir on Earth - and scientists conclude that multiple biotechnology innovations are just waiting to be developed from the viruses that are yet to be discovered in places like Iceland.

'Well, this is Iceland': PM shrugs off earthquake during interview

'It is a matter of time before supercomputers design virus treatments'