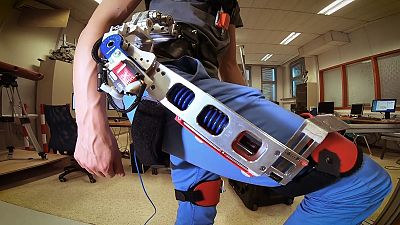 A small push above the knees, a gentle lift on the shoulders, that's the feeling of wearing a new exoskeleton designed to prevent people developing low back pain, and to help those with existing problems to get back to work.

The exoskeleton is being developed in an EU research project called Spexor, coordinated from Slovenia.

Taking the load from the spine

Project coordinator Dr Jan Babič, from the Jožef Stefan Institute, introduces the slightly strange and bulky looking prototype to Euronews: "It's a wearable robot, an exoskeleton, a spinal exoskeleton.

"It's attached on the human body on the thighs, on the pelvis, and on the back. It has a joint in the hip with a self-aligning module, and a spinal mechanism that bends together with the wearer and takes the load from the spine."

The carbon fibre rods on the rear give a supportive lift, taking the strain off your back, while the springs on the thighs give a small push on the legs.

The 6.3 kilo suit is passive while the wearer is walking around, and only activates when needed, with sensors in the chest alerting the device when the person wants to bend down.

The Spexor researchers study how humans bend their backs using body sensors that buzz when you lift something incorrectly.

They use the system to teach people how to move better, but argue an exoskeleton does have an important role to play in preventing problems.

Spexor project partner Prof Dr Nejc Šarabon, Director at S2P Science To Practice, tells Euronews: "Gaining the right techniques of everyday motions is the right way to go in addition with making muscles stronger and acting properly. But sometimes we can’t avoid those detrimental forces, and this is where other solutions, like external support come in."

Testing in a real-life factory

So much for the theory, what about the practice?

Šarabon is responsible for end-user evaluation in the project, and invites Euronews to film a testing session at engineering company Hidria. Its 2,000 employees produce components for the automotive sector, and they often have to move items manually.

Once they're wearing it, the exoskeleton transfers force from the worker's back to their legs, giving them a boost. So what do they think?

Romana Kajdiž, Operator at Hidria, tells us: "It pushes here on the lumbar; here at the sides; it moves in an elastic way, the feeling is really nice."

"As long as it will reduce my pain on the back, my legs, my arms, I’ll be happy any way I can," says her colleague on the production line Tadej Dragan.

Watching the exoskeleton in action in a real factory environment confirms the scientists' suspicion that this prototype is too wide and bulky.

"We are already working on a design where these motors will be on the back side, so they won’t obstruct the motion of the wearer," says Dr Jan Babič.

With a more ergonomic design the researchers believe their exoskeleton can make a difference, although they believe their biggest challenge will be convincing workers without back pain to wear it.

"If you’re not treating a disease, if you’re just preventing it, then it’s very difficult for the wearer to accept this technology," says Babič. "Usually it feels like a burden before you have a problem. Once you have a problem then you would like to cure it, but then it’s too late for low back pain."

The next step: another partner in this EU project aims to turn this initial design into a commercially-viable product that everyone could wear.

A new way to communicate for people with disabilties

Exoskeletons on the march