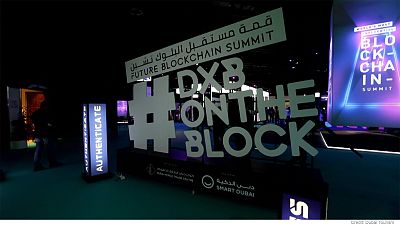 From its rather obscure beginnings as a way to record transactions for cryptocurrencies like bitcoin, blockchain is now set to revolutionize practically every facet of our lives.

Sectors from finance to healthcare are rushing to grasp and apply its disruptive potential.

And what better place to find out more than at the Future Blockchain Summit? It’s an event held in Dubai that’s billed as ‘the largest blockchain event in the world.’

Having the ability to securely upload data to the blockchain and access it in real time is a gamechanger. It can simplify all kinds of processes saving time and cutting costs. Software giant SAP uses the lifecycle of a pineapple to showcase how supply chains and even customs checks can be streamlined using blockchain.

SAP supply chain solution adviser Shahd Abdelrahman walks us through the process, starting with the farmer:

"They show if they have any certificates that they have to upload - they would register them themselves.

"From there, you have a farm worker that would come and pick and harvest these items. So again, you want to make sure that you’re tracking the harvest each day. And he just needs to have a simple mobile app on his phone where he records how many kilos he has put, what is the date of the harvest, and also the IDs of these boxes.

"This is tracked on the blockchain as well so that when they want to do the payment they can actually go and first of all benchmark against the market price to make sure that even the payment is fair. When you have a shipment that is going from one place to another - from South America to Europe -and you see along the way all of these ownership changes, which are the intermediaries.

"At the same time, we need to monitor the temperature; you can track some of the sensor data, real time. At the same time, we see that customs usually are one of the areas that are bottlenecks in our shipping. So using the blockchain, since it is a secure platform, why don't we give access to the custom agents so that they pre-clear the shipment, and it's ready to go."

Blockchain can also empower patients to track their medicine, ensure it’s safe for consumption and report any adverse reactions to local health authorities - all that using a mobile app called DHonor.

"It's a new standard of track and trace which empowers the patients to verify that the medicine is safe: That it was not exposed to temperatures beyond what is acceptable; that it was not tampered with and that it is selling from the same location - the product was not diverted to another location.

"So the the tag that we are using - the RFID tag, actually - has an anti-tamper feature. So it's a sticker that would be on the inside. If anybody is actually opening that medicine pack, it will automatically direct you to an address saying it's no longer safe for you to use.

"If a patient has used the medicine and got certain adverse reactions, he can now directly report to the health authorities, to the doctor and the manufacturer, from a press of one button.

"By actually going the step forward to allow for the patient to verify for themselves, that gives us about ten thousand times more data versus existing standards and it allows us to deliver many services for the manufacturer - to know instantly if there's any problem that requires a recall. They can easily manage what is the strategic inventory in a country or a city and understand how many of those products are safe or unsafe; where is it exactly selling - so how to maintain that inventory across a number of medicines all having the same functionality.

So in the near future - whether you’re buying a pineapple or waiting for a medicine delivery - it looks like blockchain will play a major part in it all.

Watch the full episode of Target in the media player above