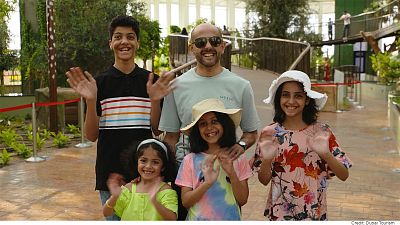 The UAE is currently ranked number 21 in the world happiness report and Dubai has set its sights on becoming the happiest place on earth.

Happiness is now a national policy goal and as well as appointing a UAE Minister of State for Happiness and Wellbeing, Ohoud Al Roumi, A Happiness Agenda has been rolled out and is overseen by the Government’s Smart Dubai department.

"Today in order to become a happy city in Dubai we need to have a collaboration between all sectors," explains Hamad al-Awadhi, Happiness Agenda leader at Smart Dubai.

"We have more than 47 happiness champions and they come from more than 40 government sectors or entities."

"And their role is to implement the happiness agenda. We train them a lot directly or indirectly to change their mindsets and terminologies about happiness as I mentioned."

Recently named one of the world's best places to work the UAE ranked fourth in economics in HSBC's Expat Explorer survey.

The top reasons for moving here included an increase in earnings, career progression and a better quality of life.

"Dubai really promotes a can-do attitude and amongst the Emirati’s and other people who choose to live here." says one resident.

"I would say the environment over here makes you feel happier." says another, "Where I’m from it rains a lot and is very grey and miserable. Here non-stop sun makes you feel good every day."

Another says "I feel safe that’s one thing. It looks clean everywhere that’s also something different."

The economic benefits of happiness

Advancements in social and data analysis have made happiness quantifiable and this has enabled governments to consider its economic value.

"They’re 50% more productive when they’re happy and they find meaning in the work that they are doing."

"They’re also 88 percent more loyal and that’s because they find meaning in the 50 percent of their life that they’re spending in that business."

"All the planet experience happiness in exactly the same way," explains Bloc. "Dopamine, Serotonin, and Oxytocin. It’s the combination of those three neurochemicals. Dopamine is the achievement, it’s the most addictive thing on the planet and every one of us produces it in our heads all the time."

"Number two is Serotonin. That’s the honour chemical. That’s what you get when you know you’re playing a significant role in the society you are in. And the third one is Oxytocin. And Oxytocin is the belonging chemical."

Thanks to AI technology from AI Directions there is also a way to measure it.

Using any camera, such as a laptop camera, the software first recognises the face and then the muscles on the face. It then analyses 64 frames a second and translates the movements in the face into one of seven emotions to see if you are happy.

Currently rolled out in more than 40 Government departments it’s collected more than two million votes since it launched.

A target of 95 percent by 2021 has been set in the hope that Happiness will continue to have a positive impact on the city’s businesses and the economy.

Find out why medical tourism is big business in Dubai

Thousands gather for the AI Everything event in Dubai