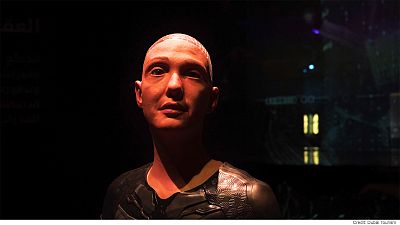 It is hard to escape the buzz around artificial intelligence right now. With more companies undertaking AI projects than ever before and new technologies making headlines on a regular basis, it is important to examine the ethics behind it.

It's a place where everyone can come and at least talk about what the future of this technology should be. And what it shouldn't."

What is artificial intelligence?

Commonly known as AI, artificial intelligence is when a machine mimics human thinking. Tasks that require a reaction to the world around you - like driving - can be taught, or programmed, to a machine using AI - a self-driving car.

AI itself isn't one particular piece of technology, it is a field of study that can be applied to many technologies. With so many applications, AI has a capacity to change the world in enormous ways.

Already there are products that recognise human speech - like home assistants. Others can help doctors diagnose illnesses in their patients. Dr. Goh Eng Lim attended AI Everything:

"We trained the neural network to recognize X-ray images that have tuberculosis and no tuberculosis. To the extent that now, when [a] person goes in for an X-ray machine... immediately within one seconds they see you are OK. You still have to wait two weeks for the doctor to certify that you're OK. And so far the machine has not been wrong relative to the doctors."

AI can have unintended social consequences though. Lord Timothy Clement-Jones is the digital economy spokesman for the House of Lords in the UK, he believed governments will need to help society adjust to the changes of AI:

"There is this existential worry about the scale of job loss in the face of A.I…whether it's going to be 25 percent or 70 percent [of jobs].

"We need to make people absolutely confident about the ability to re-skill and that the resources from government are going to be there to help them reinvent themselves throughout the course of their life."

But he believed AI won't take away jobs in every circumstance.

"I think A.I. is augmentative. i.e. it helps you do your job and isn't just going to simply take it away."

Kevin Dallas from Microsoft said these worries were a mischaracterisation of AI:

"The way we should be viewing it as we as humans have unique capabilities we have a gift a gift around creativity, imagination, emotion these capabilities that machines will never have.

The question is how do you take these unique gifts of a human being and then partner that with the power of A.I. to be able to deliver benefits to society."

Dubai sets its sights on becoming the happiest place on earth