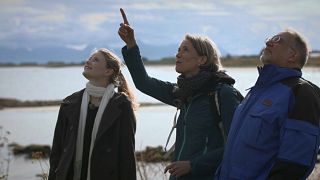 This edition of Space comes from the coast of northern Norway, where we’ve come to the Andøya Space Centre to meet scientists working on a new satellite called Aeolus, which is measuring the winds all around our planet for the very first time. But right now they’re working on calibrating and validating all of the measurements they’re getting from orbit.

​This groundbreaking mission began with the rumble of an Italian Vega rocket, which in late August this year blasted ESA's long-awaited Aeolus satellite off into space, which is now flying fast and low, just 320 kilometres above our heads.

​"Aeolus is circling Earth at the moment that we are speaking. It’s moving from the north pole to the south pole and back again, in something called a polar orbit. And as it’s moving around the Earth like this, the Earth is rotating below it, and that allows Aeolus to make measurements around the globe, actually 16 times per day," says ESA Aeolus Mission scientist Anne Grete Straume.

​Aeolus uses a laser system called a Lidar to measure the wind speed and wind along its viewing direction throughout its orbit. No space mission has ever done that before.

​However no space mission can operate in isolation, and here in Norway the science team is now swinging into action.

​The Andøya Space Centre is a dedicated multi-instrument atmospheric observatory 300 kilometres inside the Arctic Circle. Data gathered here will play a key role in calibrating and validating the wind measurements from space. ​It's a unique place.

​"If you look at our location, with this observatory at 69 degrees north, there are no observatories able to take measurements together with Aeolus. So this is the one and only station doing Lidar measurements on wind velocity and wind direction at this latitude in the northern hemisphere," says the Andøya centre's Director of Science Michael Gausa.

​Two telescopes from the Leibniz-Institute of Atmospheric Physics work in a similar way to the Aeolus satellite, using lasers to observe the wind.

That means ESA Project Scientist Anne Grete Straume can rely on them and measurements from other ground stations for comparison throughout the Aeolus mission.

​"It’s very important to understand or to check that the satellite measurements that we do are correct for all types of weather, that being storms coming in, that being good weather conditions. We need to have the comparison with these good quality ground measurements for all types of weather conditions, and this is why it’s important not to measure once and compare, but really to keep on measuring over time," she says.

​Other kinds of data are also used to gauge the accuracy of Aeolus's instruments, including readings from weather balloons.

​These parameters form the baseline of any weather forecast.

​Aeolus is not alone - other weather satellites observe temperature and humidity and have done so for decades.​

However there is no global system to measure winds around our planet.

​We can estimate the wind from the clouds and sea surface, but not the air moving in the atmosphere.

​Wind is the missing piece of the weather puzzle, as Lars Isaksen, from the European Centre for Medium Range Weather Forecasts, the ECMWF, explains:

​"Some of the largest forecast errors we have had the last 5 years have been linked to our lack of understanding of the winds in the tropics. You don't have any wind information over the oceans, the southern Pacific, no wind information at all. Even in the Atlantic you have very little information about wind," he says.

​All the new data from Aeolus will pass through the ECMWF to be processed and corrected against other weather data before before being passed on to forecasters.

​However this ESA mission is officially a test, and is yet to prove itself:

​"Nobody knows if it will work yet. And after, if it works well, we will put it in our numerical weather prediction models to improve our understanding of the 'initial state' - that is how the weather is today, which is important for doing our weather prediction. Everything depends on how the weather is today, and then you integrate a complex mathematical model forward in time, and that gives you the weather forecast for the days ahead," says Isaksen.

​Aeolus can measure wind speed and direction from the Earth's surface up to 30 kilometres in altitude. So far its delicate laser instrument appears to be working as intended.

​"Only a few weeks after we have launched the instrument into space, we've started to check out the satellite, and check out the instrument, and we've switched it on. We're already starting to get data that is looking like the data that we will have as our end product, so it's really exciting," says Anne Grete Straume.

​Looking ahead, after they've gathered several years of data, the scientists hope to use Aeolus to analyse longer term trends, and climate modelling.

​"In a changing climate like we have it now, the temperature difference between the equator and the poles is actually getting smaller, and by that you’re changing the way the wind is flowing around in the atmosphere to transport the energy around. So by understanding this in more detail we will be able to home more in on how weather will change also in a future climate," she adds.

​If the mission ends well, then further Aeolus missions could be launched to feed future weather forecasts with wind data and understand climate change.