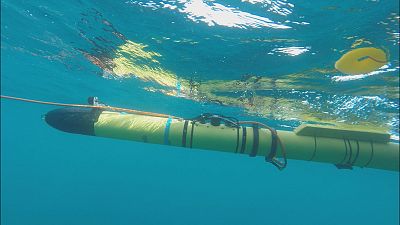 Currently, if scientists want to explore underwater they have to use sonar technology. This involves huge vessels, powerful acoustics and expensive equipment.

Now scientists are looking at a new method which involves using what looks like a child's toy submarine. In fact, these are highly developed robots.

The robots swarm together and explore using sonar technology. The sonar emits a small 'tic' sound. This sonic wave penetrates the seafloor and then is recorded by hydrophones on the robots. With this, the researchers can build up an accurate picture of the layers beneath the ground.

"The sound you are listening to, the ´tic, tic, tic´, they are electrical pulses. There are a lot of electrodes in the water, spaced apart some 10 centimeters from each other . The sonar bang goes down into the seafloor, penetrates into the seafloor and at every change of layer there will be some reflection. And with the hydrophones these sounds are recorded. And then with a lot of computer analysis, we can see with the help of those reflections, the layers that are beneath the sea floor" explains Elbert Kelholt, an electrical engineer from Geo Marine Survey Systems.

"One of our objectives was to have the greatest possible number of these vehicles underwater. Every robot is equipped with an atomic clock, something that some years ago was basically impossible. This is what allows our robots to navigate underwater. The next challenge is how they control their navigation in coordination with the others. They know where they are thanks to geo-location, so the issue here is how they work in relation to each other" says Luis Sebastiao, a sound engineer from the University of Lisbon.

The scientists working on this European research project say the robots can adapt their formation depending on their needs underwater.

"These autonomous vehicles organise themselves, depending on the needs they find underwater. As the data acquisition system basically works as an antenna, the flexibility of the robotic swarm is a great advantage" says Giovanni Indiveri, a researcher from the University of Salento

What are the possible uses of this new technology?

Eventual applications could include: