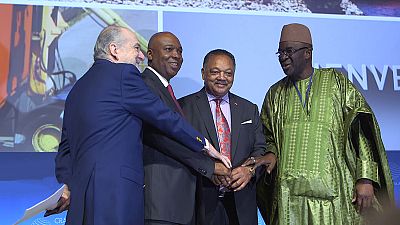 Agriculture, food security, sustainable development and the role of women — just some of the topics covered at this year’s Crans Montana Forum which was held in Dakhla.

Leaders from politics, economics and finance met in Dakhla as part of the 2017 Crans Montana Forum.

The goal: to celebrate 21st Century Africa, with a focus on increasing stability, cohesion and solidarity for sustainable development, as well as cooperation in the southern hemisphere.

More than 1,000 participants from around the world attended the event. They addressed political and institutional communication issues around Africa.

“We have come here to carry out a broad reflection on the potential of cooperation in the southern hemisphere Africa in the 21st century,” Pierre-Emmanuel Quirin, president, Crans Montana Forum, told Euronews.

“This year, we are talking about food security and sustainable agriculture. There are many areas where Morocco has succeeded in building channels of excellence. It has used them to help develop its territories and offer a renewed vision of international cooperation based on mutual respect and equality.”

Forum delegates focused on the challenges surrounding Africa’s development and the opening of new hubs for cooperation.

“Eleven percent of business trade in Africa is within African countries. It’s too little,” said Dr Abubakar Bukola Saraki Senate President, Nigeria. “Our target must be to be improve that, to much, much higher than that. That really is my focus and my message. Most of the business communities would go back here and ask how do we do more within Africa than Africa and Europe, or America.”

The former President of the Republic of #Zambia, Rupiah Banda, presents the #CMF17 as a shining example of South-South Cooperation pic.twitter.com/uueQ5JKDVr

Agriculture and economy ministers discussed how to raise the international community’s awareness of the challenges surrounding sustainable agriculture.

“Many people in African countries are experiencing hunger, which is shameful given the technology and innovative proposals made by Africans themselves,” Africa needs to address issues of water and agriculture.”

Another key issue at the forum was the integration of women into the decision making process and the impact this may have on economic and social progress.

“We talked about the problems that Arab women have faced, and we found that its same problems generally faced by African women. Poverty, the lack of education and health. Solutions need to be found to rescue African women from the situation in which they live, through education and investment in agriculture,” said Sheikha Hissah Saad Al-Salem Al-Sabah, Princess of Kuwait and Chair of Arab Businesswomen Council.

The Crans Montana Forum, which runs until March 21st, brings together nearly participants and personalities from 150 countries.#CMF17pic.twitter.com/hQA81SSssP

“My story began when I lost my child, my only son, at sea, when he left Senegal in a boat, to get to the Spanish coast to seek a better life. I want to raise awareness among young people, coastal communities about the dangers of this scourge,” Diouf told Euronews.

Could ‘15-minute cities’ change how we live, work and socialise?