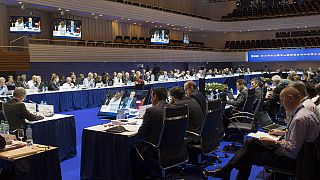 After posing for the family photo, the leaders of the European space sector closed the doors to begin debating the big questions – ExoMars and the International Space Station.

“It is always difficult to find a consensus,” added the Chair of the DLR Executive Board Pascale Ehrenfreund. “We always do, as you know, that’s why we are always having a successful outcome, but the nights, and the days, and the very early mornings are always really really heavy.”

The run up to Lucerne wasn’t smooth – last month the ExoMars Schiaparelli probe crashed into Mars, when it should have landed gently.

With the broader ExoMars mission facing a 436 million euro shortfall, industry insiders admitted there was a risk this joint Russian and European project could be abandoned.

“Actually we had some doubts,” revealed the Vice President of Thales Alenia Space, Vincenzo Giorgio. “However the confidence was coming from the fact that everybody who needs to know knew that we are already on the way to continue. We have been working like all the funding was there anyway.”

That choice to continue building ExoMars was shown to be the right one, as the Italian government set the stakes high early by promising an extra 35 million euros.

“I don’t think it’s a question of conflict between countries,” said the Italian minister of education and research Stefania Giannini. “It’s a question of different points of view, because Italy has some priorities, and my intervention was absolutely grounded on this list of priorities – ExoMars is important for this.”

In the poker game of space politics ExoMars emerged a winner, with the UK and France also raising their stakes, guaranteeing the 2020 rover mission the financing it needs to completion.

That decision was underscored by these new high resolution images of Mars just taken by the ExoMars TGO spacecraft.

“You have challenges, things don’t always go right,” pointed out ESA Director of Human Spaceflight and Robotic Exploration, David Parker. “You learn from them and move on. But I think being able to show that we are already getting value out of the first part of ExoMars certainly helped the story. But the story is also about the potential for the impact and excitement of this mission, and the real excellent science that’s going to come out of it.”

The other big ticket space project in need of cash in Lucerne was the International Space Station.

ESA struck a deal to finance it until 2024. But big questions remain about when it will be replaced, and what with.

“Germany made a contribution which allows for the prolongation of the space station until 2024,” announced Pascale Ehrenfreund. “Our government committed for that period. And what is happening after the Space Station, this is something which we will now, in the next year, discuss with all our European partners.”

“The future will be decided through discussions with our associates at the International Space Station, said the President of the French space agency CNES, Jean-Yves Le Gall. “We’re pretty sure that there will be further exploration. We talk about the Moon, we talk about Mars. I’ve always believed that the two are not mutually exclusive.”

Nevertheless, it wasn’t plain sailing for everyone in Lucerne, in particular for AIM, the mission to redirect an asteroid.

Billed as a test of whether Earth could defend itself from an asteroid, it failed to receive the just over 100 million euros it needed to proceed in its current form.

So, the key outcomes – a total of 508 million euros per year will be spent on science missions, with a few major projects now nearing launch.

“2018 is going to be an amazing year,” announced David Parker. “We’re going to be launching the James Webb Space Telescope, the biggest space telescope ever. European mission BepiColombo is going to Mercury, we’re hard at work in the science programme on a mission to Jupiter and its icy moons, which is going to be incredible.”

The other outcome – Europe’s heavy-lifting Ariane 5 will be gradually replaced by the far less costly and more flexible Ariane 6 by 2020.

And millions continues to be poured into Earth observation and telecoms.

Millions of euros which the ministers here were quick to remind us will come back in contracts for companies across the continent.

“We need a little Swedish company in a really specific sector,” stressed French Minister of State for Higher Education and Research, Thierry Mandon. “We need the Germans, we need the Italians, we need the Spanish, we need the French, we need the European space team to unite in order to compete with the Americans for example, who spend ten times more than us in Europe on the same sector.”

Overall the ministerial council finished with a budget of 10.3 billion euros over the next three to eight years – a little down on the 11billion ESA had asked for, but a clear sign of political confidence in Europe’s space sector.