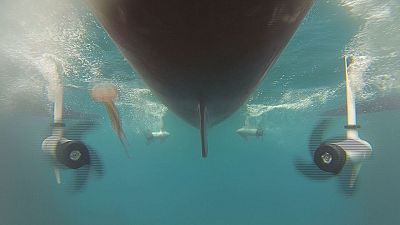 In this edition of Futuris, we look at how can we better detect marine pollution. The team travelled to Sicily where European researchers are developing innovative solutions.

Marine pollution is one of the key issues affecting our future. Futuris looked at a prototype developed by European researchers to detect and analyze possible pollutants in seawater, in real time .

There are many harmful substances polluting the sea, such as hydrocarbons, heavy metals, pesticides and antibiotics.

Currently it is difficult to efficiently detect those substances. At the heart of a European research project is a robotic boat which automatically takes samples. Biosensors on board analyze them in real time.

“Really, the fantastic thing on this boat is the biosensor,” he said. “What we are using on this particular test on the moment is looking at bacteria that responds to the toxins in the water. And the kind of toxins this device will measure, they can’t be done unless you take a sample and bring it back to the lab, and this means large boat or ships, lots of people and lots of time in the lab. With this, in a matter of hours, we can do what it will take a team’s day to do.”

At the Institute for the Marine Environment of Messina, researchers simulated an oil spill in an experimental pool to test the biosensors.

An application will raise the pollution alarm and assist with decontamination operations.

“They will be tested for five days. During this period, we will also simulate a clean up, a procedure that is part of the national emergency plan. And thanks to these biosensors, we can give an early warning, and it will tell us what will be the most suitable strategy to intervene after the oil recovery,” Denaro added.

Mini laboratories ‘on a chip’

So-called “lab-on-a-chip”, miniaturized laboratories, are being developed by researchers. They are working on three types of biosensors, using either algae, bacteria or antibodies, which react by emitting light. The sensors can be configured for any type of pollutants.

“Here we have different bacteria in different chambers [rooms],” explained Vitali Maffenbeier, microbiologist, University of Lausanne. “When a sample is taken, even as small as a drop of water, it is introduced onto this chip. If we have, for example, a lot of heavy metals in a sample, the bacteria in the middle [gesture] will produce a large amount of light. If there are very few heavy metals, it will produce less light. So we can thus measure the amount of pollutant.”

Living organisms, such as bacteria, are able to provide information on the state of the marine environment itself, something which can not be done with conventional analyzes.

“In fact, chemical analyses do not give us information to help understand how a living organism reacts,” says Denaro. “Whereas, thanks to biosensors, we are able to assess how the pollutant can be really dangerous, the toxicity of the pollutant, or the general stress state of the marine environment.”

Finding both more efficient solution and cost savings technologies, it is the challenge to improve monitoring and hence the protection of the marine ecosystem.

More information about how BRAAVOO is working to transform marine monitoring with the new platforms that will be developed here.