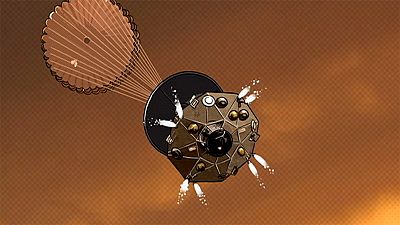 The ExoMars spacecraft is travelling to Mars right now, on a mission to search for signs of life. When it gets there in October it will send a small test probe to make Europe’s first ever controlled landing on the red planet. Vincenzo Giorgio, an engineer from Thales Alenia Space and one of the key figures behind the project, explains how it’s done.

“We arrive at Mars at a speed of 26000 km/h, we encounter the atmosphere of the planet; the heat shield system heats up, and we’re slowing down. We keep braking until we are down to 2500 km/h, at which moment we deploy the parachute and prepare to eject the heat shield. The parachute helps us to slow down further, but at a certain moment we turn on the radars below the lander. Thanks to the radars we know how far we are from the surface. Our platform will start to autonomously stabilise, thanks to the nine engines, riding retrorockets all the way down. Then, less than two metres above the surface we turn off all the engines and slowly crash land. We’re now on Mars.

The difficulty is that we could never try this landing technique on Earth in advance – because of the Martian gravity and atmosphere which are completely different. So everything comes from calculation, software simulation. Even the parachute on Mars works differently.”