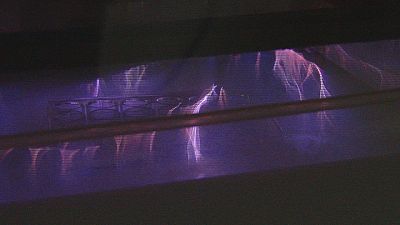 Most of the matter around us is either solid, liquid, or gas. But there is something often called the fourth state – plasma – that has remarkable properties. Could we use it to fight diseases? We investigate in this edition of Futuris.

Plasma contains a lot of reactive particles - ions, electrons, radicals and all sorts of other excited particles. When they come into contact with a surface, they change the surface properties - both chemical and physical

Getting sticky with plasma

Scientists working on a European research project (coordinated by Spinverse in Finland) use plasma to modify physical properties of various surfaces.

For example, plastic well plates, which are used for various biomedical and diagnostic purposes, normally repel liquids which can make them difficult to use.

But after the plasma treatment, liquid sticks to the bottom and the sides of the wells, making them much better suited for medical analysis.

“Plasma contains a lot of reactive particles – ions, electrons, radicals and all sorts of other excited particles,” explained Jochen Borris, a material scientist at the Fraunhofer Institute for Surface Engineering and Thin Films in Braunschweig, Germany.

“When they come into contact with a surface, they change the surface properties – both chemical and physical.”

One of the researchers’ goals is to pass this know-how on to industry.

Plasma treatment can become an attractive alternative to current production methods, which rely on using relatively larger quantities of solvents and other chemicals which aren’t always environmentally friendly.

“Many different industries could use this: it could be used for diagnosis of bacterial diseases, diagnostics for tuberculosis and HIV. But also for medical packaging and wound dressings,” said Annika Herrmann, a bio-engineer at the Institute.

A special machine applies two thin stripes of chemicals on a roll of a synthetic textile specially treated with plasma. These stripes will change colour once in contact with certain antibodies.

It is the main component of innovative rapid tests for tuberculosis and HIV, developed by this enterprise.

“We use a very simple film, which is plasma-coated, we mount that simple film in the cassettes, so no further manufacturing membranes, wicks, micro-fluidic or any kind of system is needed – we just put a drop of the serum, blood or urine on this test,” said Mahavir Singh, Professor of Genetics and Biotechnolog and Founder, Owner and Managing Director of Lionex.

“We put the second drop of the reagents for ten minutes, remove it and that’s it, and you see positive or negative results,” he continued.

Getting plasma into industry

In Mol, in Belgium, at VITO (Flemish Institute for Technological Research), large scale prototypes are demonstrating how plasma treatment can be integrated into industrial workflows.

A machine uses plasma to cover a piece of synthetic textile with an extremely thin film that turns the fabric from hydrophilic into hydrophobic or vice versa.

This can be useful in wound dressings and other medical products.

“In this technology, we’re really working on a nanometer scale. We’re producing coatings with nanometre thicknesses,” said Bert Verheyde, an organic chemist and expert in plasma technology at VITO.

“Whereas in wet chemical coatings which may be an alternative they’re mainly working on micrometre scale, using much more chemicals.”

Takeaway: does plasma have super powers?