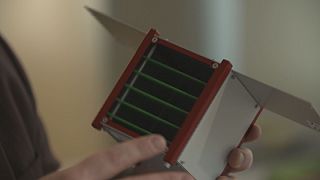 Tiny satellites the size of a small cube, jam-packed with the most advanced nanotechnologies: is this the future of Space missions?

We are developing one unit cube satellite for a remote sensing mission, which means that the satellite has to take pictures of Earth.

To find out, we went to Tallinn, Estonia, where students at the Mektory Space Centre are preparing the launch of their first nanosatellite.

Nanosatellites – tiny cubes of 10cm x 10cm x 10cm, full of nanotechnologies — are going to be more and more important in the future of space exploration, from Mars missions, to the surveillance of asteroids, which could potentially be dangerous for our planet.”

Also known as CubeSats these tiny satellites open up a whole world of possibilities for those who want to explore space.

Their potential is being seized upon by everyone from big space agencies, to small groups of students, such as those at the Mektory Space Centre, at Tallinn’s University of Technology.

Marta Hang, is the CubeSat Programme assistant at the centre.
“I would have never thought that I can build a satellite in my life, because I have always thought that only NASA is building satellites. But no. I can do it in my own university, also,” she said,

Tashi Dolma Gyeltshen, a Masters student in Industrial Engineering is also working on the project. She added:
“We are all coming from different backgrounds in this project and we work as a team, and all of us put in so much effort.”

Preparation for work in the space industry

The Mektory nanosatellite programme is an international university initiative being worked on by students and professors, in association with space and technology industries.

Its goal is to prepare students for working in the space industry.

They are currently working on their first space mission.

Mart Vihmand, the head of the Mektory Space Centre outlined the project:
“We are developing one unit cube satellite for a remote sensing mission, which means that the satellite has to take pictures of Earth.”

This type of satellite can fit in the palm of your hand and weighs between 1 and 10 kilograms. It is low-cost because it is largely based on existing electronic components.

The launch of the student-made nanosatellite is likely to take two more years of work, as Vihmand explained:
“From the project plan until the completion of the satellite takes 3 years, of which 80% of the time is usually meetings and design behind the computer.

“Actually, when you start to produce this final piece that is going to fly in space, then the machine puts it together, in a certain environment, and places the components within 1 minute.”

CubeSats deliver into orbit a high concentration of nanotechnologies that you can even build using a 3D printer, as they do in Tallinn.

CubeSats have also caught the attention of the European Space Agency, which wants to send these tiny satellites deeper into the solar system.

“Computers have themselves been shrinking over time, going from a computer that would be the size of a room to something which you now see on your mobile phone,” he said.

In addition to being valuable educational tools, CubeSats are fit for a wide range of applications. For instance, as an affordable test for in-orbit technologies, or to carry out observations and measurements in space.

“There is a complete satellite functionality inside this box; so you have the possibility to generate power with solar panels, distribute the power internally, communicate with the ground station on Earth and also to run experiments and transmit the data back down to ground again,” Walker added.

At the ESA’s radio-testing facility, a Cubesat called QARMAN is being examined.

This year (2016) it will be used to test re-entry technologies and heat-shield materials.

But the future for these tiny satellites is even bigger. In 2020 an ESA-NASA mission is expected to begin, which is designed to impact and redirect an asteroid.

It will be a small-scale test to prevent such a threat to our planet.

“We are studying CubeSats for scientific and exploration purposes in deep space and one of those missions would be piggy-backing on the asteroid impact mission,” Walker explained.

“Those CubeSats would be taking observations of the asteroid before and after a NASA spacecraft comes in to impact the asteroid itself.”

Exploring the Moon and Mars

These tiny spacecraft can have multiple applications as the process of miniaturisation is unstoppable.

In the coming years, they will also be embedded in exploration missions to the Moon and Mars

The cheaper costs of their production and launch are provoking more and more interest in CubeSats within the space industry.

Their capacity not only as exploration tools, but also as tools of inspiration, is extremely valuable.

“The younger generation now growing up, they will be the ones to figure out what to do with this technology in the best way,” predicted Walker. “And we will probably see things, which we never saw or even thought of before.”

Student Tashi Dolma Gyeltshen was excited at the prospect of the launch.
“I just can’t wait for it to happen, for our CubeSat to be launched. It will be a great achievement for every one of us,” she said.

While Vihmand added:
“We are making more people capable of doing things for space and also preparing them for the bigger missions.”

Marta Hang has big hopes for the project.
“I also hope that our university will build a bigger satellite and, why not bring one of our students to the moon one day. Why not?”

This year on Space we’ll be following a mission called ExoMars. It’s the first to look for direct signs of life on the red planet.

The first of two spacecraft launches in just a few weeks’ time, and we have exclusive access to the team behind the project.

This is Destination Mars

Jorge Vago, one of the Exomars Project Scientists at the European Space Agency (ESA), outlined the mission.

“Mars is a cold, frigid desert, with a very thin atmosphere, that gets bathed in cosmic radiation and intense UV light. It is not a place (where) you want to be.

“In March, a Russian Proton rocket is going to send our first spacecraft to Mars. We want to solve the mystery of methane on Mars. And a second mission, which will go a few years from now, has a rover and an instrumented surface platform, as well.

“We really are going for traces of life with the Exomars programme. Once the rover is on Mars, it will encounter fine dust, very challenging for locomotion, and rocks. So, dust, fine dust is not our friend in this mission.

“It is technically hard, it is scientifically very ambitious and also programmatically it is not often that two agencies get together to do missions on another planet.”