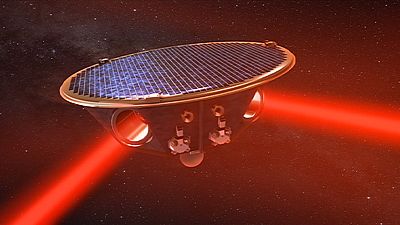 The LISA Pathfinder spacecraft is due to set off in autumn 2015 in a bid to prove that it is possible to observe gravitational waves in space. This is the latest step in an incredible journey to spot these ripples in spacetime that were first predicted by Albert Einstein 100 years ago.

If we can manage to capture these waves, then we should be able to observe some of the most violent events in the cosmos, such as black holes colliding and galaxies merging.

For the moment, however, we’re still searching. ESA’s LISA Pathfinder project scientist Paul McNamara told Euronews: “Gravitational waves are coming from all over the universe. However, the fact that it’s gravity, it passes through stars, galaxies, you, me, the Earth, everything.” In short, they are very difficult to observe.

However, there is optimism an observation will happen sooner rather than later, according to Karsten Danzmann, director of the Albert Einstein Institute in Hannover, and one of the world’s leading authorities on the subject: “So far we haven’t seen anything, but any minute now a star could explode, and then we could see a signal.”

LISA Pathfinder won’t actually measure gravitational waves. Instead the ESA mission will prove the technology, which centres around two free-floating gold platinum cubes inside the spacecraft. If it works then it will lead to a much bigger mission, involving three spacecraft flying in formation, linked by lasers.

Once we can make the technology work, it means a revolution in astronomy, as McNamara tells us: “Gravity is the fundamental force of the universe. At the largest scales of talking about stars, galaxies, the universe, they’re dominated by gravity.”

With millions of potential sources all over the universe, expectations are high. Michèle Heurs, a professor at Leibniz Universität Hannover says: “Gravitational waves will be a completely different way of looking at the universe, seeing things that do not emit what we would consider light.”

Danzmann concludes: “All the universe interacts via gravity, and that gives us the hope that gravitational waves will really let us listen to the dark side of the universe. And who knows what’s out there?”

We would like to say a big thank you to those who provided footage and animations to this programme.

For the drone images of GEO600, thanks to the Max Planck Institute for Gravitational Physics (Albert Einstein Institute Hannover) & Milde Marketing

For the animations, thanks to ESA/Christophe Carreau, ESA/Hubble (spacetelescope.org), and NASA Goddard SVS.

For more about gravitational waves watch this previous edition of Space