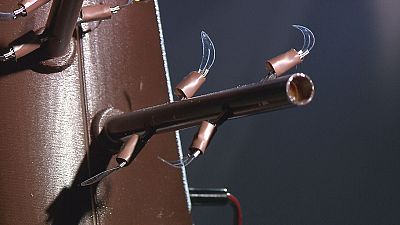 Scientists in Italy are working on creating robots that mimic the properties of plant roots, including the capacity for growth. They believe the potential future applications are not just the stuff of science-fiction.

Before creating their root-like robots, researchers needed first to understand how real roots behave underground – a far from simple task, as Barbara Mazzolai, a biologist at the Italian Institute of Technology and coordinator of the Plantoid Project explained: “Plants roots evolve in a very complex environment; deep in the ground.

“They have to apply huge pressure to grow, and they only grow from the tip through what we call osmosis. They gain mass by taking water from the soil, by absorbing elements and then by expelling materials and dead cells. At the same time they produce a kind of mucus that helps them to grow and extend underground.”

The scientists from this European research project first had to develop a mechanism that allows the robot to dig deep into the ground, effectively creating its own mass out of artificial material, according to Ali Sadeghi, a mechanical engineer at the Italian Institute of Technology: “Growth in nature occurs by adding material. So we tried to mimic that by developing what we called ‘a growing system’.

The robotic roots react to stimuli as natural roots do; by bending away from obstacles or heavy metals in the soil while actively looking for nutrients or water.

“We are mimicking this very characteristic bending in two ways. First we use electro-biological fluids. These fluids become more or less viscous depending on the electrical charge that you apply. And we also make the robot bend by overlaying (superimposing) more or less artificial material on its sides.” said Barbara Mazzolai.

To see and feel their way through soil the robots are equipped with sophisticated sensors, made from soft but resilient materials.

“These sensors have been designed to decode and read information about the surrounding environment and external objects; the sensors sort of know when they are being touched. They are also able to understand what is the pressure and the forces they are being subjected to,” said Lucia Beccai, an electronic engineer at the Italian Institute of Technology.

These robotic roots could be used in spatial exploration, or to help nutrients, minerals, oil or antipersonnel mines buried in the ground.

But scientists have even bolder applications in mind. They foresee a future where a self-growing, flexible and adjustable robotic tool could assist in brain surgery to replace existing rigid, more invasive tools, as IIT aerospace engineer Edoardo Sinibaldi explains: “The big challenge is to be able to create a self-growing surgery tool that is very small.

“The problem is that small, flexible surgery tools can be less effective and less incisive in performing some surgical actions. So in the future we will have to find an instrument that is both flexible and more rigid”.

Whatever the final outcome, researchers believe a new era of robotic exploration with huge potential has taken root.

Do you know: what is a soft robot?

Do you know: what's the wood wide web?