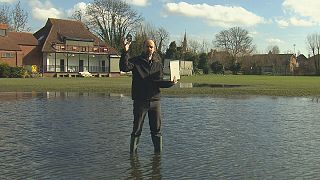 The recent floods in the UK saw a lot of the management of that disaster made possible by using information from satellites. But how? In this edition of Space we find out.

Flooding affects thousands of people every year across Europe, and this year one of them just happened to be a flood scientist – Spanish Research Fellow at Reading University in England, Javier García-Pintado.

His back garden looks onto the Thames, he explains: “This is the bank of the Thames, and this areas was severely affected by the recent flooding. Specifically in this little bit of land we are a tiny bit higher, and we didn’t have any problems, but our neighbours around here certainly did.”

García-Pintado knew his young family was safe at home, because he could count on his expert knowledge; his day job is using satellite data to improve flood models.

“As hydrologists we were pretty confident that this property wouldn’t have a problem, and we told our neighbours,” he told euronews.

Not everyone has a neighbour as knowledgeable as Javier, nor were they as lucky.

The whole area west of London was affected as England and Wales lived through their wettest winter in almost 250 years.

Across England alone 6,500 homes were flooded.

The British government looked to space for help. Satellite images showed the extent of the disaster.

However those images were not available quickly. In fact they took around 30 hours to be processed. Javier and his colleague David Mason at the University of Reading can use that data for post-flood analysis, but they want to go further, to get information faster, and be one step ahead of the floodwaters.

“Just like they’ve improved weather forecasting, they know when it’s going to rain pretty accurately, up to three days ahead. Now we are hoping to get flood forecasting more accurate in the short term,” says Professor Mason.

That vision of flood forecasting will move towards reality with the launch of ESA’s Sentinel satellites. They promise a real step change in disaster monitoring.

“When we get to the Sentinel 1 satellites, they will be able to give us imagery in near real time, an hour or so after the download to the ground station, and then you get to the sort of situation where you can use this imagery in a flood prediction mode, in a flood forecasting mode,” explained Mason.

The Sentinel satellites promise more than a deluge of data on flooding. The fleet comprises seven different satellites, and each will scan the Earth in different ways.

The project is overseen by the Director of the Copernicus Space Office, Josef Aschbacher, at ESA’s Earth Observation base near Rome.

“Once the system is set up we really have a very wide variety of satellites and instruments that measure a magnitude of parameters, really everything that you can measure from space, from land parameters for flooding, for forest fires, for volcanic eruptions, damage after earthquakes, but also oil spills, ocean parameters, sea surface height, sea surface temperatures, climate parameters, air quality, ice coverage, and so on. So really whatever can be measured more or less will be measured by this constellation of Sentinel satellites which are being built up right now,” he says.

Funding for the Sentinels comes from taxpayers through the ‘Copernicus’ programme, formerly known as GMES. It is led by the European Commission, in partnership with ESA and the European Environment Agency.

Everyone will be able to enjoy the view from these new eyes in the sky.

“The data policy, which was decided recently, is open and free, because this data is also something on which we can build a lot of business development, also for European companies, in Europe and also outside Europe, and this is only possible if the raw data are free. It’s a little bit like the navigation signal – you have a free signal from space, and then a lot of businesses are founded based on that on the ground,” says ESA’s Director of Earth Observation Volker Liebig.

The Copernicus programme is already up and running, but will expand greatly in the next two years as the Sentinels launch, and begin offering many terabytes of data per day.

“In the best case we are coming down to about half a metre resolution, which is quite precise. Then you go to a range of about five metres resolution, where you can measure different parameters, typically agricultural information, agricultural fields, yield predictions. Then you go to about 200 metres, 250 metres, which is used for global mapping of the oceans, really parameters at a global scale which of course have a different type of user and a different type of interest,” promises Aschbacher.

Back in England, Javier García-Pintado believes the near real-time flow of Sentinel-1 satellite data will make a difference. Flood forecasting is an emerging field in science, and it will grow with more timely and accurate information.

“With the ESA satellite we will be able to have a vertical resolution in the order of tens of centimetres, and that is what will allow us to say that this area over here will get flooded and that area of the cricket field won’t get flooded, and that will help us develop much better action plans,” he says, to the delight of hard-pressed ground staff everywhere.

The Sentinel satellites may orbit 700 kilometres above our heads, but they should have a very clear effect on the ground.