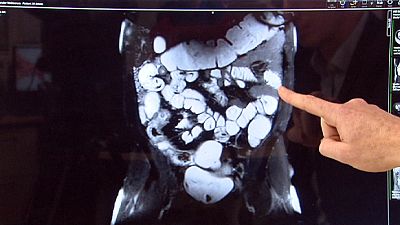 Around 700,000 Europeans are diagnosed with Crohn’s disease each year.

Specialists at University College hospital in central London, are exploring new ways to detect the disease and help patients cope with its symptoms.

Crohn’s suffer Jill Fellows said: “It really is a very nasty disease, and people need to be able to realize that, and really don’t have the mentality that it is just going to the bathroom all the time, because it is so much more than that.

“You get Crohn´s arthritis; I got my hands literally seized up. I got affected in my hip as well. Also I had Crohn’s in my eye, which [got swollen]. This disease virtually knocks your immune system even more. So you are so susceptible to everything”.

The condition causes inflammation of the intestine and symptoms can vary.

“At the end of the day, they operated on me. They thought it was a split bowel so effectively they opened up the bowel and sent me on my way but the pain just got worst and worst.

“It took a good 2, maybe 3 years before they could find that it was Crohn’s disease, because I went through so many tests,” he added.

Crohn´s disease is usually diagnosed through X-Rays or invasive techniques like endoscopy or colonoscopy.

But at this hospital, researchers from a European project are testing brand new ways to diagnose it using the latest available medical imaging technology.

Radiologists are testing magnetic resonance to look for signs of local bowel wall thickening, a common early sign of the disease.

Stuart Taylor, a Radiologist at University College London Hospitals, said: “If you look at this example here [graphic], you can see an abnormal loop of small bowel here. And this is affected by Crohn´s disease, it is much thicker here than the normal small bowel adjacent to it.

“From the patients’ point of view this is a very safe test. We don’t do any radiation, so therefore there is no long-term disadvantages to the patient”.

Magnetic resonance images offer 3D capabilities and can be matched with computer models, which can predict some physiological processes in the patient’s bodies. A big help for gastroenterologists to prescribe the more appropriate treatment for each
patients’ particular needs.

“We can then semi-automate that by the computer analysis, using all the various scientific algorithms, that come within the program, then we stand the chance of fine tuning that even further”.

Researchers hope these new and more accurate methods will keep sufferers better informed of their condition, which is very much welcomed.

“Research is fundamental, you know. We have to find out what causes the disease, and if there could be a cure eventually. Specially for the youngsters now, because it is heartbreaking to see so many young people with it,” said Jill Fellows.

“We are doing more fundamental research enabling that a patient is more accurately assessed. And I think that this technology will be used in the future in the next, let’s say, four years or so,” said Frans Vos, a Physicist, Delft University of Technology.