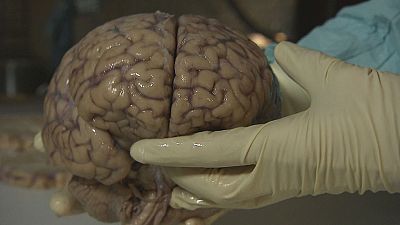 The brain controls our thinking, feelings and movements and a new exhibition in southern France aims to reveal some of its secrets.

European researchers are trying to unlock the brain’s deepest mysteries – and its amazing capacities.

The exhibition is called Cervorama. Its curator Vincent Jouanneau told euronews: “Evolution led to the creation of many different brains in animals, each of them with very different capabilities. And even in human beings, we have brains that differ a lot from one individual to another. Depending on how we are going to use our brain, on our life experiences, on our accumulated knowledge, we will develop more or less cognitive functions. This plasticity is what transforms our brain into a unique organ, perfectly adapted to each individual”.

“In the past, brains could only be studied in corpses, during or after autopsies. Nowadays, we are able to watch, in real-time, a live brain working thanks to medical imaging. These innovations are helping us understand much better how our brains work,” Jouanneau adds. “Of course, everybody is afraid of touching this fragile human organ. Neurosurgery is not an anodyne appendicitis operation. Dealing with the brain still creates apprehension.”

Doing away with drilling

One hospital in Lithuania is undertaking an unusual test. Patients with head trauma are provided with strange plastic glasses to measure the pressure on their brain tissues

Until now, these measurements – key to determining if patients are at risk of further brain damage – involved literally drilling into the skull. That is a dangerous and costly procedure which each year prevents more than one million European patients from having a proper examination of their brain injures.

Vilnius University neurosurgeon Saulius Rocka believes the figure soon be a thing of the past: “This platform gives us, neurosurgeons, the possibility to understand what is happening in the brain without being invasive. Invasive measurements are nowadays standard in neurosurgery. But you can’t use invasive measurements, for instance, with conscious patients. This equipment enables us to produce safer, faster and more accurate measurements of intracranial pressure.”

The platform is based on ultrasound technology. Ultrasound beams are gently applied to the eye. They measure blood flow parameters in two different regions of the opthalmic artery. The ultrasound signal is processed in a fast and precise way, according to its developers.

The BrainSafe project coordinator and business developer Edvardas Satkauskas explained: “We are trying to measure the speed of blood particles and other parameters in really small vessels in the brain. The big challenge is to be accurate, so our platform must be very sensitive. That’s why we had to develop innovative technologies, like digital signal processing solutions or filtering algorithms; all fit into a united electronic platform.”

The brain is much more than a fragile human organ. Children visiting the exhibition learn that the brain has the amazing capacity to increase its own potential almost by itself. But brains can also lose that potential equally fast when they grow older.

“Brain plasticity is the result of many different things. But neurons come top of the list. They are able to organise by themselves. They create networks. The more you stimulate them (the neurons), the more these networks of neurons will be developed and reliable. On the contrary, the less you stimulate neurons, the more these networks will be forced to finally disappear,” he added.

A group of scientists in Vienna is engaged in hands-on brain research activities to explore the deepest molecular secrets of ageing brains.

They are particularly trying to understand why some old brains stay healthy while others develop neurodegenerative diseases like Alzheimer’s.

Gabor G. Kovacs is a neurologist and neuropathologist at the Medical University of Vienna. He also coordinates the Develage project.

“The neurons, the nerve cells, which have a lot of contact between each other, they first lose these contacts. Then, after they lose these contacts, the neuron nerve cells will die. And in parallel to this, they accumulate proteins, pathological proteins. This is what goes wrong in a brain with Alzheimer’s disease. What we want to discover is, what is the first step of this process? When a patient goes to the doctor already with symptoms, the neurons are already lost; they are already dead. We want to go back five or eight years before, back to the time where the disease really starts,” said Kovacs.

So far, his research team believe they have learned quite a few things. They think that the same proteins and genes directly involved in the development of the brain may also have a role in its subsequent neurodegeneration as time passes by. That discovery, they say, provides essential clues to improve the diagnosis and treatment of Alzheimer’s disease.

“It’s very important to understand why some people remain free of dementia, whether they have any protective genetic alteration. So in our project we not only focus on risk factors in the whole genome, but we also try to focus on protective factors; what kind of genetic constellation (structure) can protect against Alzheimer’s disease. If we find this genetic alteration, we can translate this discovery to a protein level. And then we can generate a marker, or we can try to target these pathways for therapy, and we can generate something that can then be useful for other people,” added Kovacs.

Brains have amazing, still hugely unexplored, capabilities. They can for instance control robots or machines through computers.

Complex techniques known as Brain Computer Interfaces are already been used by researchers to provide hope to people with no or reduced mobility in their arms or legs.

Cervorama exhibition curator Vincent Jouanneau told us: “We see more and more paraplegic persons that are able to use their brains to pilot machines through computers. We know that brains have incredible capacities. And depending on what you connect them to, brains will be able to kind of communicate with those machines. So it is really hard to see what are the limits of our brains.”

A laboratory in Linz has helped to develop a device that uses the brain to turn lights on and off. Electrodes around the skull detect when electrical signals in the brain are more or less active. A computer reads that brain activity and translates it into orders to the light switch.

But researchers think the brain can be stimulated to do much more. It could for instance help paraplegics interact mentally with video games, play board games or open doors from a distance.

And the best may still be to come according to computer scientist Stefan Parker, coordinator at AsteRICS project: “Brain Computer Interfacing basically works by attaching electrodes at the right spots on the head, where certain brainwaves can be measured. For our system only one change in the brain signal is enough to build a computer control. Just as when you are using something you refer to a single switch to activate a certain control, we can also use a single brain signal to activate a certain control (in some machines).”

Researchers are already testing the possibilities of controlling sophisticated flying machines with a combination of sensor techniques, computer vision and brainwaves.

And more down-to-earth, extremely practical applications are already under way.

“One example would be the control (with the brain) of an e-wheelchair, in a very solid and precise way. Or controlling with the brain a computer, in that way the computer would work a lot faster. We could also foresee a future where brain signals could help control orthosis, which could give highly paraplegic people the possibility to grab again,” said Gerhard Nussbaum, computer scientist at Austria’s Kompetenznetzwerk KI-I

But far more research is still needed, researchers conclude, before they can solve the many scientific puzzles still posed by our fragile, sophisticated and virtually amazing brain.