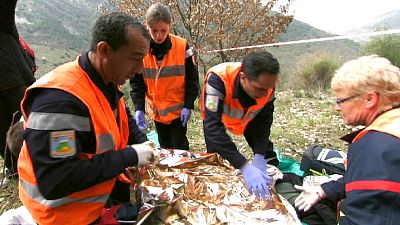 The very first hours after a disaster are crucial to limiting damage and containing the number of potential victims. Often, several hours can go by before the true nature of a crisis is understood. A lot can happen in this time.

Futuris followed a team in southeastern France working on an emergency system able to collect and fuse, in real time, large amounts of data relating to a disaster – a crucial tool for emergency crisis teams to take efficient decisions in a very short time.

“All this kind of information is harmonized in order to create a unified picture for the decision makers, so they will be able to understand exactly what is going on in the disaster area, and take the right decision,” says Gideon Hassani, an engineer and project coordinator for the Emergency Support System project.

The basis of this testing exercise is a simulated plane crash in the small town of Sospel on the border between France and Italy. The system can be set up in one hour and is entirely autonomous, with its own generators and satellite communication system. It brings together, in one emergency room, all the data collected.

The idea is to provide ready actionable data, i.e. the information required for making high-quality decisions under pressure.

“Often, in disaster operations, the head of operations is completely blind, he cannot see what’s really happening on the field. So our role is to to gather enough visual and other data to provide him with sufficient information to manage the crisis,” says Colonel Claude Picard, director of CEREN (Centre d’etudes et de recherches économiques sur l‘énergie).

The focal point of the project is the sensors that are deployed all around the disaster area. They measure things like temperature, pressure, wind, the presence of toxic gas, etc.

To get visual control of the situation, the project includes drones and an aerostatic balloon, equipped with cameras – technology borrowed directly from the army.

“Using night vision cameras and infrared camera, you can fly in a forest and identify warm spots – we do it in the military world but we also do it in the emergency world – and this way you can identify people or living beings that have a warmer temperature than the environment, and direct the emergency and the first aid forces to people who need it, to survivors,” says Felix Frisch, Marketing Director at Aeronautics Defense Systems.

Modern society is confronted with an increasing number of abnormal events including natural disasters, crises and accidents. One of the biggest challenges facing public authorities when managing emergency response is the lack of actionable information.

“These tools have to be the best, ready for use in a very short time. The aerostatic balloon can be set up very fast and can be used in a wide range of scenarios,” says Leonardo Bruni, Fire Chief in the Italian town of Imperia.

Events like the 2005 terror attacks in London and Hurricane Katrina proved that precious time was lost because of a lack of up-to-date information sharing between different public authorities. The data streams of the Emergency Support System can be easily combined with other available databases, with the ultimate ambition of revolutionising the crisis communication system.