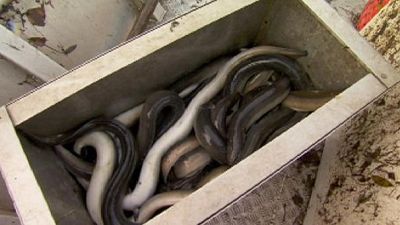 It’s an eerie night on the Loire River, in Western France, and we’re on the trail of a mysterious fish. The eel. But after 3 hours, the catch thins out.

Researchers confirm the steep decline of European eels. For many they’re a delicacy, but eels are now also now an endangered species. Wild stocks in Europe are half what they were just a few years ago. EU scientists are trying to answer this question through researching the eel’s biology and curious migratory patterns.

Small bones are analysed to determine the age at what eels leave European rivers to spawn somewhere around the Sargasso Sea, in the Atlantic Ocean.

These researchers leave no stone unturned. Scientific fishing starts early in the morning. And the task is far from easy. First, the researchers first need to find the right sized specimens to tag. The animals are measured and weighed. Their eyes and skin are also studied and catalogued.

Meanwhile, biologists study information from other tags, if they can be recovered, that record depth and seawater temperature. Similar tags Ireland, Spain and Sweden have already confirmed that eels can travel up to 45 kms per day and swim as deep as 1,200 meters while migrating in Atlantic waters. But some unexpected data still puzzles scientists.

Tagged eels are ready for their journey of around 5,000kms to their spawning grounds. It’s a journey that researchers hope will provide plenty of scientific data, not just to ensure the well-being of this fish, and the future of the food market it feeds – but also for the sake of eco-systems all over the Earth.