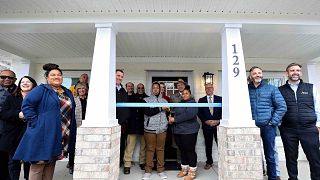 April Stringfield and her son can move in immediately.   -   Copyright  Habitat for Humanity
By Doloresz Katanich  •  Updated: 29/12/2021

April Stringfield and her 13-year-old son have received the keys to their very own 3D-printed home just days before Christmas. It was Habitat for Humanity’s first 3D project in the US.

April has been dreaming about becoming a homeowner for years. The single mother lives in Williamsburg and she has been balancing between three jobs which didn't provide enough for her to buy her own place. She applied for the help of Habitat for Humanity Peninsula and Greater Williamsburg to purchase her home.

The construction of each home built by the NGO is a cooperative effort. Communities, volunteers and future homeowners gather to build and renovate affordable houses sold at no profit with a zero-interest mortgage. April has already worked 300 hours of hands-on labour on behalf of Habitat before she qualified for her own house.

This time, the work was reduced due to the innovative technology involved. The NGO teamed up with 3D printing company Alquist. Printing the exterior and interior walls of the 111 m2 (1,200 square foot) house took just 12 hours. This step reduced the standard construction time by at least four weeks, says the NGO.

The new home has three bedrooms and two bathrooms and was built from concrete.

Using concrete for the walls instead of lumber meant saving on the costs. In the US, lumber prices have risen 50 per cent since the pandemic began. April's future bills will be also lower as concrete retains temperature more effectively than wood, saving on heating and cooling costs.

In addition, the walls are more resistant to tornado and hurricane damage. The home will be outfitted with solar panels for even more cost savings after the family moves in.

“My son and I are so thankful,” said April upon receiving her new home. “I always wanted to be a homeowner. It’s like a dream come true.”

The new house is equipped with its own 3D printer, so April will be able to print knobs, light switch covers and other replaceable parts if needed.

Habitat for Humanity Peninsula and Greater Williamsburg raised funds for the house with the help of sponsors, a community crowdfunding campaign and its charity golf tournament.

The only other 3D printed Habitat home is currently under construction in Tempe, Arizona.