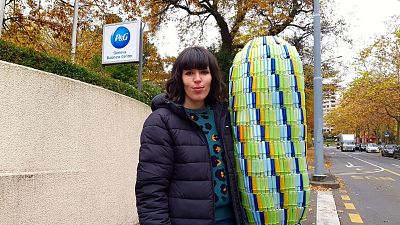 She was attempting to deliver a giant tampon applicator constructed out of period plastic found polluting beaches, waterways and local ecosystems in the UK.

The piece of protest art is composed of 1,200 applicators from 15 different locations around the country.

Of the plastic applicators collected for the project, 87.5 per cent came from Tampax, one of Procter & Gamble’s most successful brands.

Tampax controls 29 per cent of the tampon market, but has yet to act on Daish’s campaign “to reduce or remove plastic from their tampons and pads.”

The #EndPeriodPlastic movement has already successfully encouraged three UK retailers to ditch plastic applicators. Aldi, Sainsbury’s, Superdrug and Lil-Lets have responded to the movement by removing single-use plastic from their own-brand tampons.

Time to make a change

Daish began her End Period Plastic campaign in February 2018, while working as a postal worker.

Of the 10 tampon retailers and manufactures she has spoken to throughout the course of her project, Procter & Gamble has been the least responsive.

“I’ve been doing this campaign for over three and a half years and despite being the global leader of these products, they are not doing anything,” says Daish.

“I met Tampax in May 2019 and nothing has changed. This isn’t good enough.”

The British environmentalist says that she is tired of the excuses Tampax has posted online, highlighting one particularly infuriating post in which plastic applicators are posed in the shape of a wind turbine.

“Just because they use wind energy to pump out millions of single-use plastic applicators with no consideration of the negative environmental impacts, doesn’t make it sustainable.”

She is now calling on the American multinational to tackle period plastic by making three commitments:

Daish hopes that the industry giant will realise that “the time for change is now.

“They constantly put the ownership of this problem onto the individual, but they have the money and the power to affect change.”

How bad are plastic period products for the environment?

Single-use period products can take centuries to break down, and most plastic applicators cannot be recycled at all.

The Institution of Environmental Science estimates that around 2.5m tampons are disposed of via the toilet every day in the UK. If wastewater is released into the environment, this means that plastic applicators can find their way into aquatic ecosystems.

“I have lost count of the pictures that people have sent me of applicators polluting their local area, from the Isles of Scotland to the coastlines of Cornwall, and waterways in cities like London and Southampton,” says Daish.

“Even crabs in the River Thames are being found with stomachs full of plastic in them, including that from period pads.”

What are the most sustainable period products?

While Procter & Gamble has proven reluctant to reduce plastic in their products, many companies around the world are now manufacturing environmentally friendly period products.

THINX and Modi Bodi have come up with 100 per cent absorbent underwear for women who want to reduce their plastic footprint every month. Comfortable and stylish, the pants are designed to absorb menstrual flow, meaning pads and tampons aren’t necessary.

If absorbent underwear isn’t your thing, menstrual cups can save more than 2,500 disposable products, according to brand & Sisters. The cup can be used for up to 12 hours before needing to be emptied - that’s four times longer than the average tampon.

Yet another way you can choose to have a greener period is to buy a reusable applicator. Buying just one means you can use it every single time you change your tampon.

Since the launch of its reusable applicator, Dame claims to have saved 122 million pieces of single-use plastic from being thrown away. The applicator is made from self-sterilising Mediprene and comes packaged in recycled materials.

What’s next for the #EndPeriodPlastic campaign?

As the success of Daish’s campaign continues to grow, she is now looking into new ways to spread the period pollution message.

The British activist is the star of an upcoming feature-length documentary by Outpost Pictures, who have been working with Daish since Spring 2021.

The film follows the work of the postal-worker-turned-environmental-activist as she takes on global brands in a bid to rid the world of pointless plastic from period products.

She is currently on a journey around Europe to raise awareness of single-use plastic pollution in the period industry.